potential of area selective deposition (ASD) with a newly developed chemical vapor deposition method, which utilize plasma electrons as reducing agents for deposition of metal-containing films, is demonstrated using temperature sensitive polymer-based masking materials. The masking materials tested were polydimethylsiloxane (PDMS), polymethylmethacrylate (PMMA), polystyrene (PS), parafilm, Kapton tape, Scotch tape, and office paper. The masking materials were all shown to prevent film growth on the masked area of the substrate without being affected by the film deposition process. X-ray photoelectron spectroscopy analysis confirms that the films deposited consist mainly of iron, whereas no film material is found on the masked areas after mask removal. SEM analysis of films deposited with non-adhesive masking materials show that film growth extended for a small distance underneath the masking material, indicating that the CVD process with plasma electrons as reducing agents is not a line-of-sight deposition technique. The reported methodology introduces an inexpensive and straightforward approach for ASD that opens for exciting new possibilities for robust and less complex area selective metal-on-metal deposition. 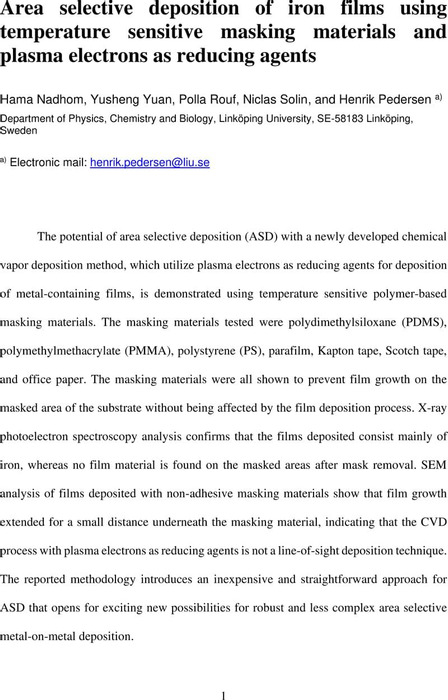