Surfactant molecules, known as organic friction modifiers (OFMs), are routinely added to lubricants to reduce friction and wear between sliding surfaces. In macroscale experiments, friction generally decreases as the coverage of OFM molecules on the sliding surfaces increases; however, recent nanoscale experiments with sharp atomic force microscopy (AFM) tips have shown increasing friction. To elucidate the origin of these opposite trends, we use nonequilibrium molecular dynamics (NEMD) simulations and study kinetic friction between OFM monolayers and an indenting nanoscale asperity. For this purpose, we investigate various coverages of stearamide OFMs on iron oxide surfaces and silica AFM tips with different radii of curvature. We show that the differences between the friction-coverage relations from macroscale and nanoscale experiments are due to molecular plowing in the latter. For our small tip radii, the friction coefficient and indentation depth both have a non-monotonic dependence on OFM surface coverage, with maxima occurring at intermediate coverage. We rationalise the non-monotonic relations through a competition of two effects (confinement and packing density) that varying the surface coverage has on the effective stiffness of the OFM monolayers. We also show that kinetic friction is not very sensitive to the sliding velocity in the range studied, indicating that it originates from instabilities. Indeed, we find that friction predominately originates from plowing of the monolayers by the leading edge of the tip, where gauche defects are created, while thermal dissipation is mostly localised in molecules towards the trailing edge of the tip, where the chains return to a more extended conformation. 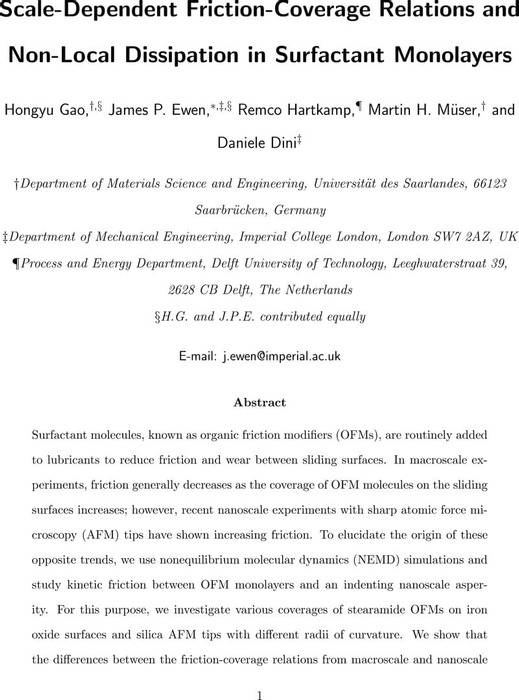 download asset AFM_of_OFMs-v3.pdf 7 MB [opens in a new tab] cloud_download
pdf : 7 MB
We are encoding your file so that it is compatible across browsers, depending on file size and type this may take some time.