Amidinate and guanidinate ligands have been used extensively to produce volatile and thermally stable precursors for atomic layer deposition. The triazenide ligand is relatively unexplored as an alternative ligand system. Herein, we present six new Al(III) complexes bearing three sets of a 1,3-dialkyltriazenide ligand. These complexes volatilize quantitatively in a single step with onset volatilization temperatures of ~150 °C and 1 Torr vapor pressures of ~134 °C. Differential scanning calorimetry revealed these Al(III) complexes exhibited exothermic events that overlapped with the temperatures of their mass loss events in thermogravimetric analysis. Using quantum chemical density functional theory computations, we found a decomposition pathway transforming the relatively large hexacoordinated Al(III) precursor into a smaller dicoordinated complex. The pathway relies on previously unexplored inter-ligand interactions, in which protons migrate between the triazenide ligands. These new Al(III) triazenides provides a series of alternative precursors with unique thermal properties that could be highly advantageous for vapor deposition processes of Al containing materials. 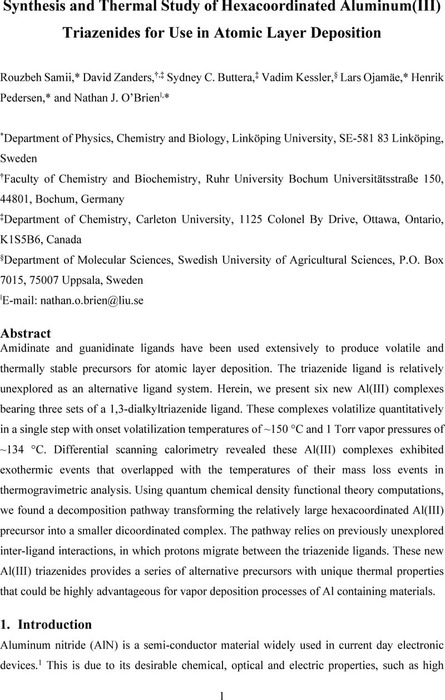 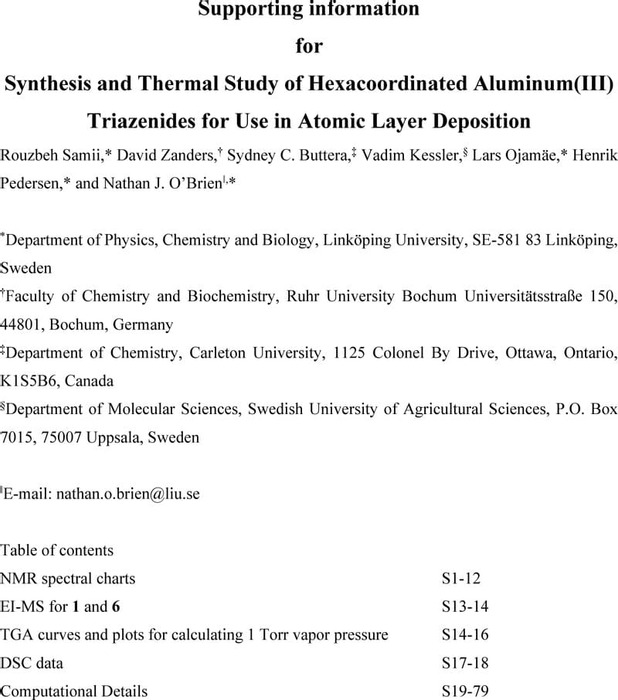 We are encoding your file so that it is compatible across browsers, depending on file size and type this may take some time.
Al Triazenides Supp Info FINAL

This project was founded by the Swedish foundation for Strategic Research through the project “Time-resolved low temperature CVD for III-nitrides” (SSF-RMA 15-0018) and by the Knut and Alice Wallenberg foundation through the project “Bridging the THz gap” (No. KAW 2013.0049). L.O. acknowledges financial support from the Swedish Government Strategic Research Area in Materials Science on Functional Materials at Linköping University (Faculty Grant SFO Mat LiU no. 2009 00971). Supercomputing resources were provided by the Swedish National Infrastructure for Computing (SNIC) and the Swedish National Supercomputer Centre (NSC).