Learn more about our Privacy Notice ... [opens in a new tab]
Agriculture and Food Chemistry
search

Cashew apple presents a characteristic astringency. However, the compounds responsible for this characteristic were not described yet. A cashew apple extract was added to a BSA solution and the compounds before and after precipitation were analyzed by UPLC-QTOF/MSE. The extract astringency was measured on a 5-point scale (0: non astringent and 4: extremely astringent). Among the phenolics detected anacardic acids were identified and evaluated for their astringent effect. In the sensorial tests the cashew apple extract was considered very astringent (average of 2.5). A mixture of anacardic acids, had an average of 1.76 (astringent). The three isolated anacardic acids were evaluated. The in silicoexperiments were performed to analyze mainly the steric factor associated to the binding. The sensory results were confirmed by in silico analysis, indicating that a higher unsaturation degree of the aliphatic chain leads to an astringency increase. 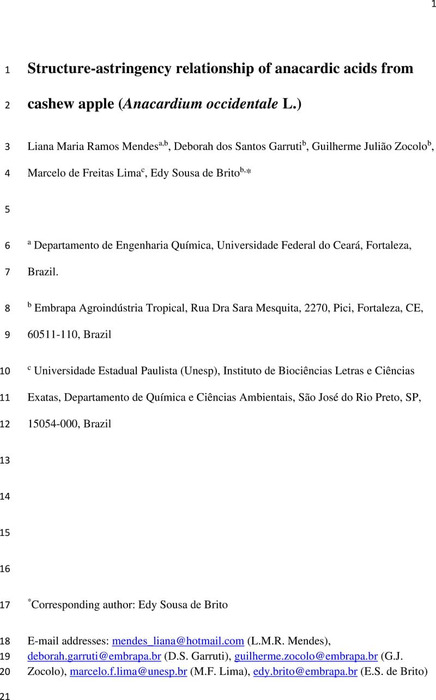 download asset 12336704.v1.pdf 0.50 MB [opens in a new tab] cloud_download
pdf : 0.50 MB
We are encoding your file so that it is compatible across browsers, depending on file size and type this may take some time.