Al-doped ZnO (AZO) is a promising earth-abundant alternative to Sn-doped In2O3 (ITO) as an n-type transparent conductor for electronic and photovoltaic devices; AZO is also more straightforward to deposit by atomic layer deposition (ALD). The workfunction of this material is particularly important for the design of optoelectronic devices. We have deposited AZO films with resistivities as low as 1.1 x 10-3 Ωcm by ALD using the industry-standard precursors trimethylaluminum (TMA), diethylzinc (DEZ), and water at 200◦C. These films were transparent and their elemental compositions showed reasonable agreement with the pulse program ratios. The workfunction of these films was measured using a scanning Kelvin Probe (sKP) to investigate the role of aluminum concentration. In addition, the workfunction of AZO films prepared by two different ALD recipes were compared: a “surface” recipe wherein the TMA was pulsed at the top of each repeating AZO stack, and a interlamellar recipe where the TMA pulse was introduced halfway through the stack. As aluminum doping increases, the surface recipe produces films with a consistently higher workfunction as compared to the interlamellar recipe. The resistivity of the surface recipe films show a minimum at a 1:16 Al:Zn atomic ratio and using an interlamellar recipe, minimum resistivity was seen at 1:19. The film thicknesses were characterized by ellipsometry, chemical composition by EDX, and resistivity by four-point probe. 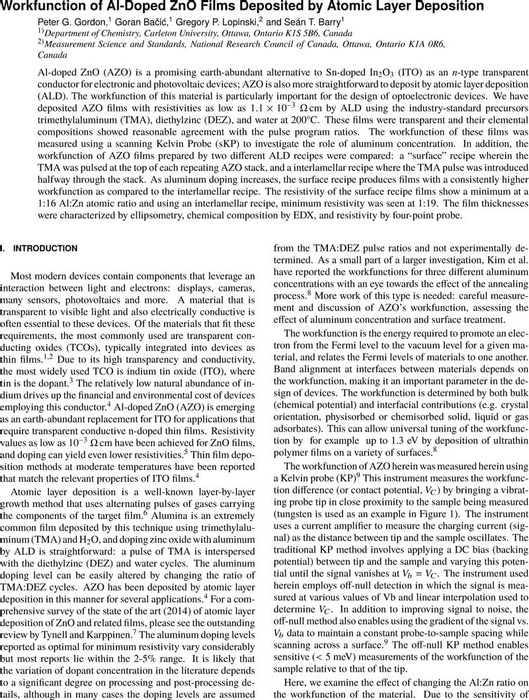