On the Separation of Enantiomers by Drift Tube Ion Mobility Spectrometry

Racemic mixtures of twelve common a-amino acids and three chiral drugs were tested for the separation of their enantiomers by ion mobility spectrometry (IMS)-quadrupole mass spectrometry (MS). Separations were tested by introducing chiral selectors in the mobility spectrometer buffer gas. (R)-α-(trifluoromethyl) benzyl alcohol, (R)-tetrahydrofuran-2-carbonitrile, (L)-ethyl lactate, methyl (S)-2-chloropropionate, and the R and S enantiomers of 2-butanol and 1-phenyl ethanol were evaluated as chiral selectors. Experimental conditions were varied during the tests including buffer gas temperature, concentration, and type of chiral selectors, analyte concentration, electrospray voltage, electrospray (ESI) solvent pH, and buffer gas flow. The individual enantiomers yielded different drift times for periods of up to 8 hours in a few experiments; such drift times were sufficiently different (~ 0.3 ms) to partially resolve the enantiomers in racemic mixtures, but these mixtures always yielded a single mobility peak at the experimental conditions tested with a drift time similar to that of one of the enantiomers. Energy calculations of the chiral selector –ion interactions showed that these separations are unlikely using 2-butanol as chiral selector but they might be feasible depending on the nature of chiral selectors and the type of enantiomers. 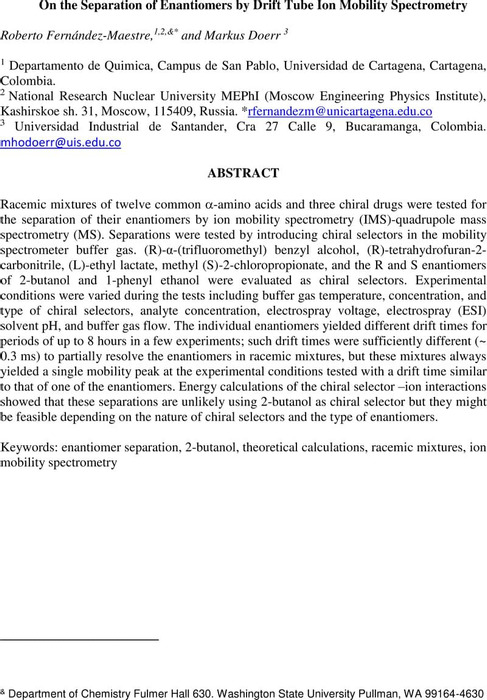 download asset On the separation of enantiomers by IMS ChemRxiv.pdf 2 MB [opens in a new tab] cloud_download
pdf : 2 MB
We are encoding your file so that it is compatible across browsers, depending on file size and type this may take some time.

The authors declare that they have no known competing financial interests or personal relationships that could have appeared to influence the work reported in this paper.