BiasNet: A model to predict ligand bias towards GPCR signaling

The Universirty of Texas at El Paso

Signaling bias is a feature of many G–protein coupled receptor (GPCR) modulating drugs with clinical implications. Whether it is therapeutically advantageous for a drug to be G Protein biased or β-Arrestin (β-Arr) biased, depends on the context of the signaling pathway. Here, we explored GPCR ligands that exhibit biased signaling to gain insights into scaffolds and pharmacophores that leads to bias. More specifically, we used BiasDB, a database containing information about GPCR biased ligands and all ligands which show a (β-Arr) / G protein bias or a G protein / β-Arr bias are considered for the study. Four machine learning models were trained on these ligands to classify them. The features which were most important for training the models were analyzed. Two of these features (number of secondary amines and number of aromatic amines) were more prevalent in β-Arr biased ligands. After training a Random Forest model on HierS scaffolds, we found five scaffolds which demonstrated G protein or β-Arr bias. We also conducted t-SNE clustering, observing correspondence between unsupervised and supervised machine learning methods. To increase the applicability of our work, we developed a web implementation of our models which can predict bias based on a user-provided SMILES patterns. Our web implementation is available at: drugdiscovery.utep.edu/biasnet. 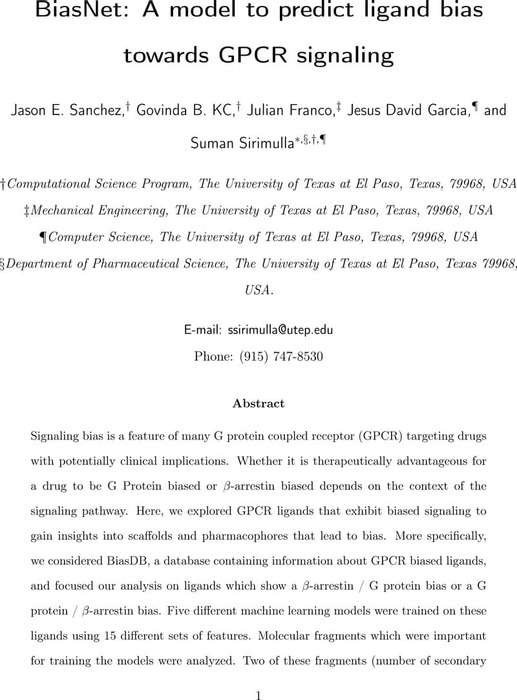 download asset BiasNet__A_model_to_predict_ligand_bias_towards_GPCR_signaling (1).pdf 3 MB [opens in a new tab] cloud_download
pdf : 3 MB
We are encoding your file so that it is compatible across browsers, depending on file size and type this may take some time.