In this study, for the first time, self-driven photodetector based on cubic CH3NH3PbI3 large single crystal (C-MAPbI3 LSC) with adjustable positive-negative signal is fabricated. The preparation of MAPbI3 large single crystal (MAPbI3 LSC) is realized by the method of growth-drop-growth (GDG). The band gap of MAPbI3 single crystals with Pm-3m (221) space group (6.134×6.134×6.134 Å, 90.00 x 90.00 x 90.00) is 1.58 eV. CH3NH3+ cation is orientation-disorder within the perovskite cubo-octahedral cavity. The photocurrent density at 803 nm of the C-MAPbI3 LSC photodetector under different bias voltages is the highest under different wavelength. The responsivities (R), response time, external quantum efficiencies (EQE) and the detectivity (D) for C-MAPbI3 LSC photodetector at 803 nm wavelength with 1 W m-2, respectively, is 508.7 µA/mW, 0.1338 ms, 79.6% and 8.64*1011 Jones. Notably, the C-MAPbI3 LSC photodetector can be self-driven under 0 V bias voltage, in particular, the positive and negative values of the photocurrent can be adjusted. The proposed mechanism of poling inducing built-in potential is explained adjustable positive-negative signal in self-driven photodetector based on cubic CH3NH3PbI3 large single crystal. 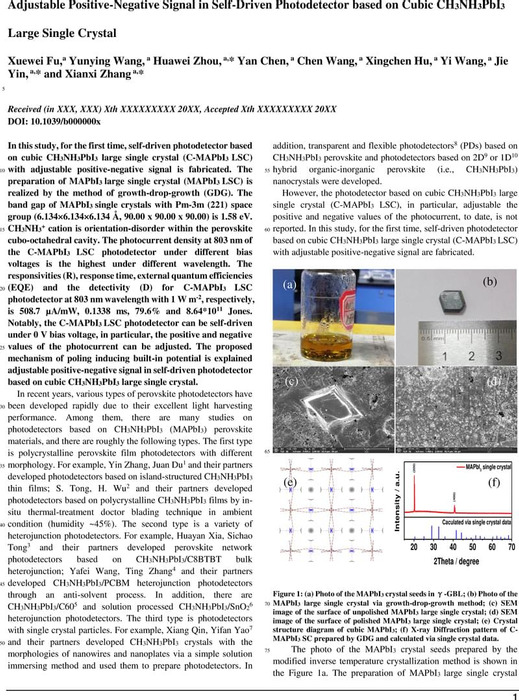 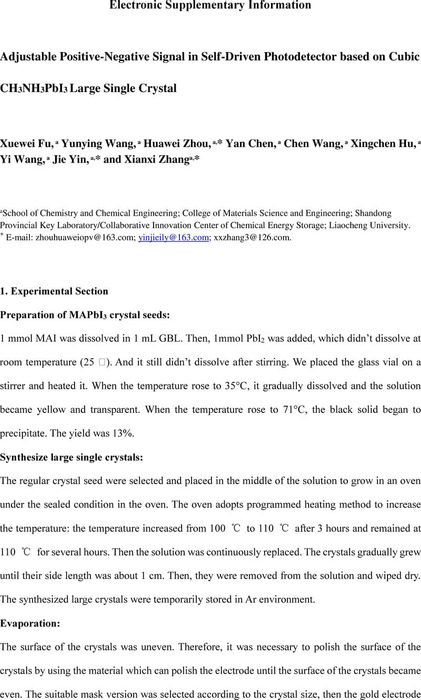 We are encoding your file so that it is compatible across browsers, depending on file size and type this may take some time.
20210302 Electronic Supplementary Information(1)

This work was financially supported by the Shandong Province Natural Science Foundation (Grant No. ZR2019MB021).