The number of M–N bonded divalent group 14 precursors suitable for atomic layer deposition is limited, in particular for Ge and Pb. A majority of the reported precursors are dicoordinated, with the only tetracoordinated example being the Sn(II) amidinate. No such Ge(II) and Pb(II) compounds have been demonstrated. Herein, we present tetracoordinated Ge(II), Sn(II) and Pb(II) complexes bearing two sets of the bidentate 1,3-di-tert-butyl triazenide ligands. These compounds are highly volatile and show ideal behavior by thermogravimetric analysis. However, they have unusual thermal properties and exhibit instability during sublimation. Interestingly, the instability is not only temperature dependent but also facilitated by reduced pressure. Using quantum-chemical density functional theory, a gas-phase decomposition pathway was mapped out. The pathway account for the unusual thermal behavior of the compounds and is supported by electron impact mass spectrometry data. 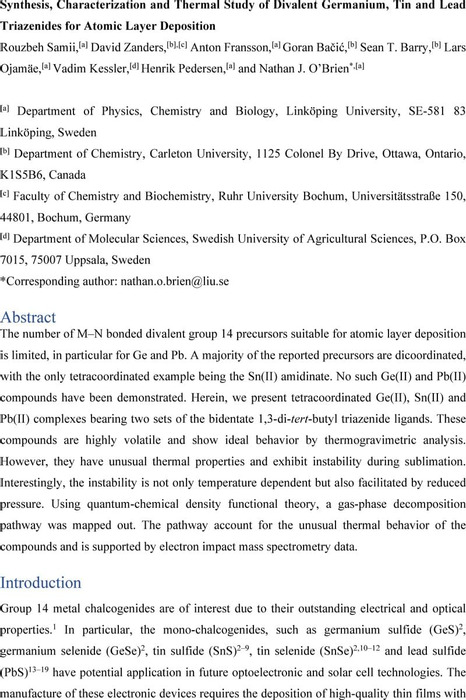 We are encoding your file so that it is compatible across browsers, depending on file size and type this may take some time.
G14 Triazenides Supp Info FINAL

This project was founded by the Swedish foundation for Strategic Research through the project “Time-resolved low temperature CVD for III-nitrides” (SSF-RMA 15-0018) and by the Knut and Alice Wallenberg foundation through the project “Bridging the THz gap” (No. KAW 2013.0049). L.O. acknowledges financial support from the Swedish Government Strategic Research Area in Materials Science on Functional Materials at Linköping University (Faculty Grant SFO Mat LiU no. 2009 00971). Supercomputing resources were provided by the Swedish National Infrastructure for Computing (SNIC) and the Swedish National Supercomputer Centre (NSC). Support from the Swedish research council VR-RFI (2017-00646_9) for the Accelerator based ion-technological center, and from the Swedish Foundation for Strategic Research (RIF14-0053) for the tandem accelerator laboratory in Uppsala is gratefully acknowledged.

The authors have no conflict of interest.