CAMKK2 is a serine/threonine kinase and an activator of AMPK whose dysregulation is linked with multiple diseases. Unfortunately, STO-609, the tool inhibitor commonly used to probe CAMKK2 signaling, has limitations. To identify promising scaffolds as starting points for the development of high-quality CAMKK2 chemical probes, we utilized a hinge-binding scaffold hopping strategy to design new CAMKK2 inhibitors. Starting from the potent but promiscuous disubstituted 7-azaindole GSK650934 (CAMKK2 IC50 = 3 nM), a total of 32 compounds, composed of single ring, 5,6-, and 6,6-fused heteroaromatic cores were synthesized. The compound set was specifically designed to probe interactions with the kinase hinge-binding residues. These compounds were evaluated in vitro in biochemical and cellular assays for CAMKK2 inhibition. Compared to GSK650394 and STO-609, thirteen of our compounds displayed similar or better CAMKK2 inhibitory potency in vitro, while compounds 13g and 45 had greatly improved selectivity for CAMKK2 across the kinome. Our systematic survey of hinge binding chemotypes identified several potent and selective inhibitors of CAMKK2 to serve as starting points for medicinal chemistry programs aimed at the identification of CAMKK2 chemical probes and clinical candidates 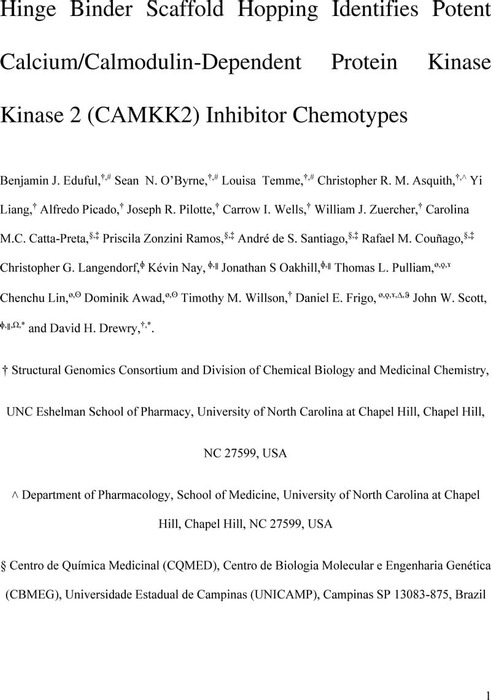