Side-chain substitutions have important influence on the aggregation of perylene diimide (PDI), which show a great impact on their excited-state dynamics as well. Herein, by employing photoluminescence (PL), time-resolved photoluminescence (TRPL) and transient absorption (TA) spectroscopy, we investigated excited-state dynamics of two perylene diimide (PDI) derivative amorphous films, i.e. undecane-substituted PDI (PDI-1) and diisopropylphenyl-substituted PDI (PDI-2), fabricated with spin coating method. Femtosecond transient absorption spectra reveal that both films show pronounced ground state bleach (GSB) with lifetime longer than 10 ns while the relaxation of excited state absorption (ESA) has typical lifetime less than 1 ns. The significant feature of excited state decay in PDI-2 is dominated by transforming the singlet excited state into two triplet states via singlet fission, which is evidenced by the appearance of triplet state absorption. By contrast, the absence of triplet state absorption and the appearance of long-lived emission species in PDI-1 suggest that the decay of excited-like state could be dominated by the formation of excimer. Our present study reveals for the first time that the singlet fission does occur in amorphous PDI film, the study also demonstrates that side-chain substitutions have great impact on the excited-state dynamics of PDI. 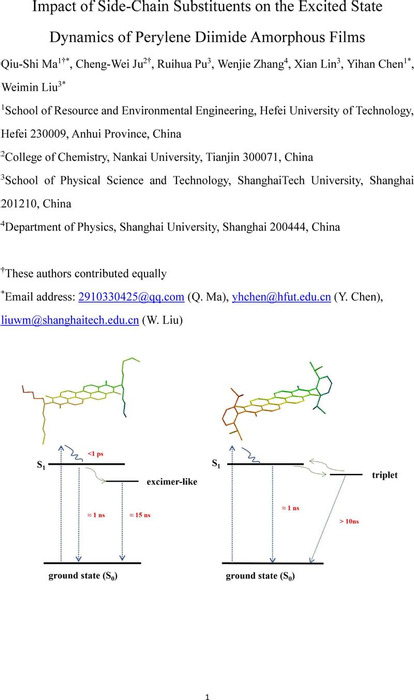 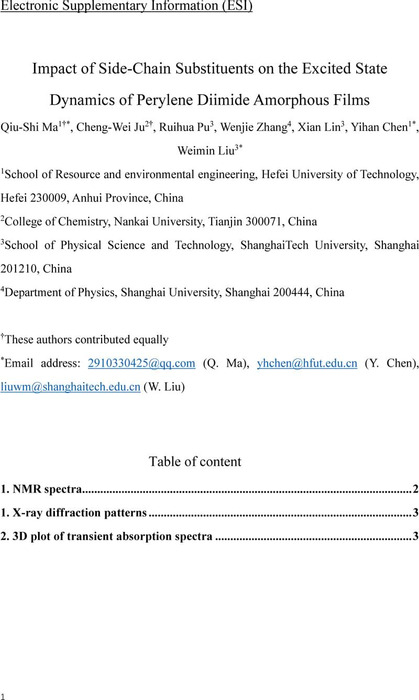 We are encoding your file so that it is compatible across browsers, depending on file size and type this may take some time.
Electronic Supplementary Information