Cobalt is a potential candidate in replacing copper for interconnects and has been applied in the trenches and vias in semiconductor industry. A non-oxidizing reactant is required in plasma-enhanced atomic layer deposition (PE-ALD) of thin films of metals to avoid O-contamination. PE-ALD of Co has been demonstrated experimentally, but the growth mechanism and key reactions are not clear. In this paper, the reaction mechanism of metal cyclopentadienyl (Cp, C5H5) precursors (CoCp2) and NHx-terminated Co surface is studied by density functional theory (DFT) calculations. The Cp ligands are eliminated by CpH formation via a hydrogen transfer step and desorb from metal surface. The surface facet plays an important role in the reaction energies and activation barriers. The results show that on the NHx-terminated surfaces corresponding to ALD operating condition (temperature range 550K to 650K), the two Cp ligands are eliminated completely on Co(100) surface during the metal precursor pulse, resulting in Co atom deposited on the Co(100) surface. But the second Cp ligand reaction of hydrogen transfer is thermodynamically unfavourable on the Co(001) surface, resulting in CoCp fragment termination on Co(001) surface. The final terminations after metal precursor pulse are 3.03 CoCp/nm2 on NHx-terminated Co(001) surface and 3.33 Co/nm2 on NHx-terminated Co(100) surface. These final structures after metal precursor pulse are essential to model the reaction during the following N-plasma step.. 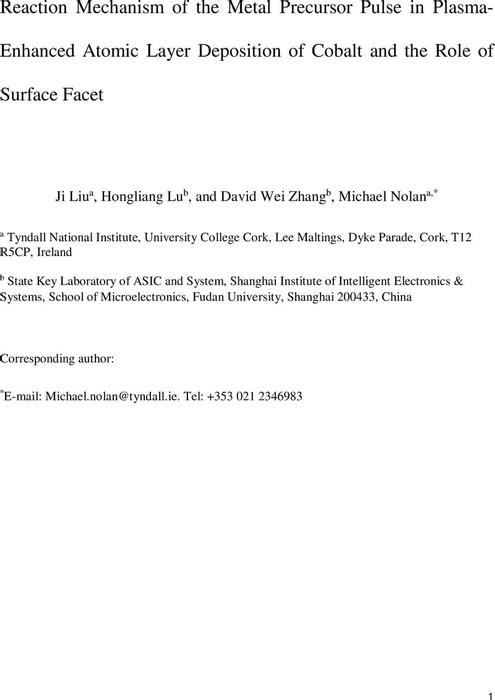 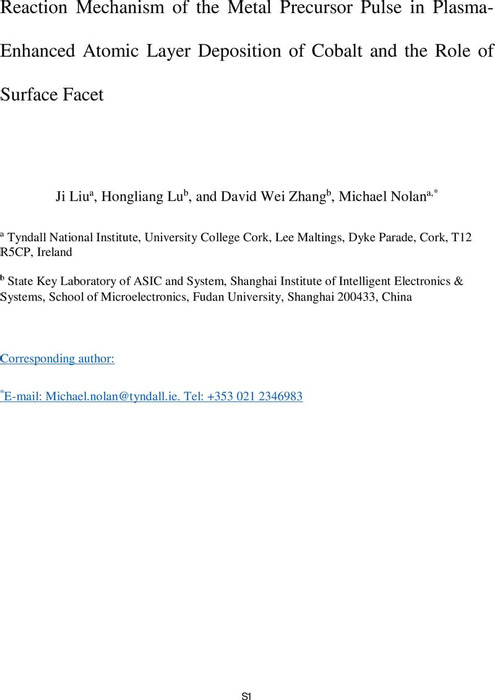 We are encoding your file so that it is compatible across browsers, depending on file size and type this may take some time.
Supporting information JL