Thin films of the sp2-hybridized polytypes of boron nitride are interesting materials for several electronic applications such as UV-devices. Deposition of epitaxial sp2-BN films has been demonstrated on several technologically important semiconductor substrates such as SiC and Al2O3 and where controlled thin film growth on Si would be beneficial for integration of sp2-BN in many electronic device systems. We investigate growth of BN films on Si(111) by chemical vapor deposition from triethylboron B(C2H5)3 and ammonia NH3 at 1300 °C with focus on treatments of the Si(111) surface by nitridation, carbidization and nitridation followed by carbidization prior to BN growth. Fourier transform infrared spectroscopy shows that the BN films deposited exhibit sp2 bonding. X-ray diffraction reveals that the sp2-BN films predominantly grow amorphous on untreated and pre-treated Si(111), but with diffraction data showing that turbostratic BN can be deposited on Si(111) when the formation of Si3N4 is avoided. We accomplish this condition by a nitridation procedure in a deposition chamber where BxC had previously been deposited at high temperature, but where the synthesis route needs to be further developed for a better process control. 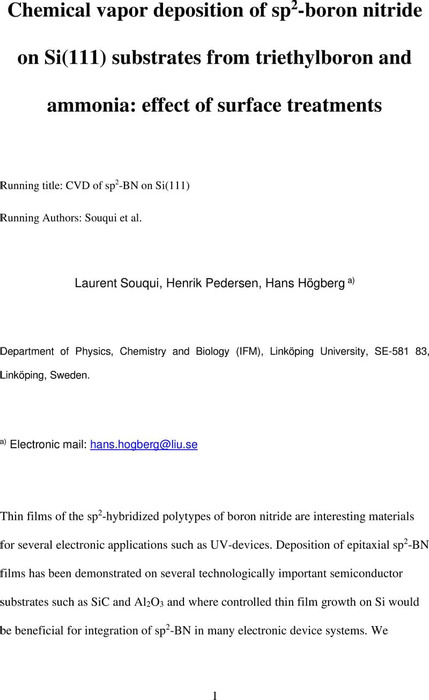 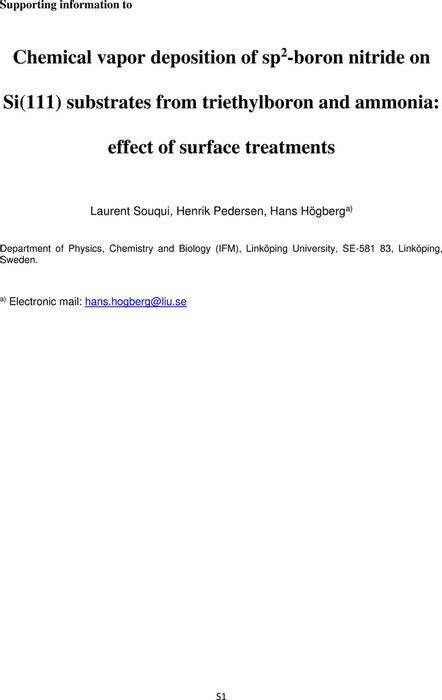 We are encoding your file so that it is compatible across browsers, depending on file size and type this may take some time.
BN on Si - supp info - submitted

No conflicts to declare