A Maltol-Containing Ruthenium Polypyridyl Complex as a Potential Anticancer Agent

Cancer is one of the main causes of death worldwide. Chemotherapy, despite its severe side effects, is to date one of the leading strategies against cancer. Metal-based drugs present several potential advantages when compared to organic ones and gained trust from the scientific community after the approval on the market of the drug cisplatin. Recently, we reported a ruthenium complex ([Ru(DIP)2(sq)](PF6), where DIP is 4,7- diphenyl-1,10-phenantroline and sq is the semiquinonate), with a remarkable potential as chemotherapeutic agent against cancer, both in vitro and in vivo. In this work, we analyse a structurally similar compound, namely [Ru(DIP)2(mal)](PF6), carrying the flavour-enhancing agent approved by the FDA, maltol (mal). To possess an FDA approved ligand is crucial for a complex, whose mechanism of action might include ligand exchange. Herein, we describe the synthesis and characterisation of [Ru(DIP)2(mal)](PF6), its stability in solutions and in conditions which resemble the physiological ones, and its in-depth biological investigation. Cytotoxicity tests on different cell lines in 2D model and on HeLa MultiCellular Tumour Spheroids (MCTS) demonstrated that our compound has higher activity compared to the approved drug cisplatin, inspiring further tests. [Ru(DIP)2(mal)](PF6) was efficiently internalised by HeLa cells through a passive transport mechanism and severely affected the mitochondrial metabolism. 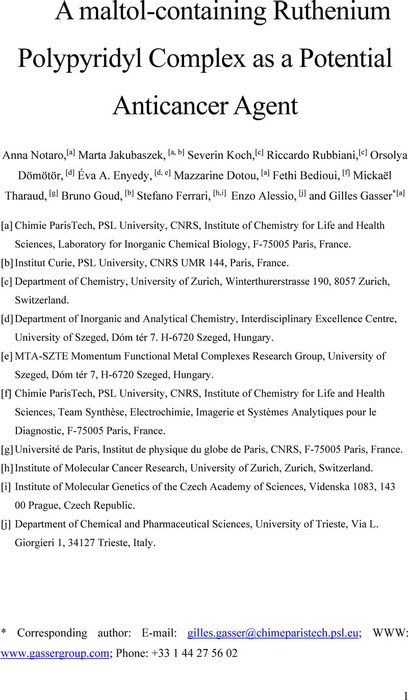