Learn more about our Privacy Notice ... [opens in a new tab]
Agriculture and Food Chemistry
search

Ethylene bis(dithiocarbamates) (EBDTCs) have been used as staple fungicides for over 75 years. The first industrially manufactured EBDTC was zineb, zinc ethylene bis(dithiocarbamate), marketed under the tradename Dithane. Even though zineb has been used as a fungicide since the 1940s, its crystal structure remained unknown. Herein, we describe the crystal structure of zineb (triclinic crystal system, space group P–1, a = 7.5094(9) Å, b = 9.4356(9) Å, c = 7.4120(7) Å, α = 107.945(8) °, β = 100.989(7) °, γ = 105.365(8) °, V = 460.07(10) Å3). The inorganic fragment of the structure consists of two Zn2+ cations, coordinated by the thiocarbamate group. There are four Zn–S bonds with lengths in the range of 2.325 – 2.426 Å, and one rather long Zn–S contact of 2.925(8) Å. Inorganic fragments are linked by organic EBDTC ligands to form extended, polymeric layers. The layers are packed in a ABAB manner, related by the inversion symmetry and held together by hydrogen bonding network. In this article, in addition to describing the crystal structure, we correlate the structural features with the vibrational spectroscopic and thermal characteristics of zineb, and we provide a short summary of the major developments of fungicides in the 20th century 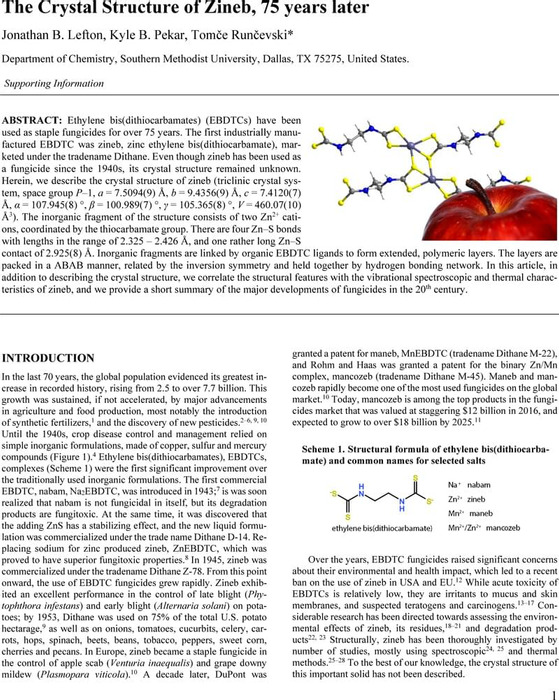