The electroadsorption of proteins at aqueous-organic interfaces offers the possibility to examine protein structural rearrangements upon interaction with lipophilic phases, without modifying the bulk protein or relying on a solid support. The aqueous-organic interface has already provided a simple means of electrochemical protein detection, often involving adsorption and ion complexation; however, little is yet known about the protein structure at these electrified interfaces. This work focuses on the interaction between proteins and an electrified aqueous-organic interface via controlled protein electroadsorption. Four proteins known to be electroactive at such interfaces were studied: lysozyme, myoglobin, cytochrome c, and hemoglobin. Following controlled protein electroadsorption onto the interface, ex situ structural characterization of the proteins by FTIR spectroscopy was undertaken, focusing on secondary structural traits within the amide I band. The structural variations observed included unfolding to form aggregated anti-parallel β-sheets, where the rearrangement was specifically dependent on the interaction with the organic phase. This was supported by MALDI ToF MS measurement, which showed the formation of protein-anion complexes for three of these proteins, and molecular dynamic simulations, which modelled the structure of lysozyme at an aqueous-organic interface. Based on these findings, the modulation of protein secondary structure by interfacial electrochemistry opens up unique prospects to selectively modify proteins.

Revisions based on peer review comments. Final journal decision has not yet been confirmed following resubmission. 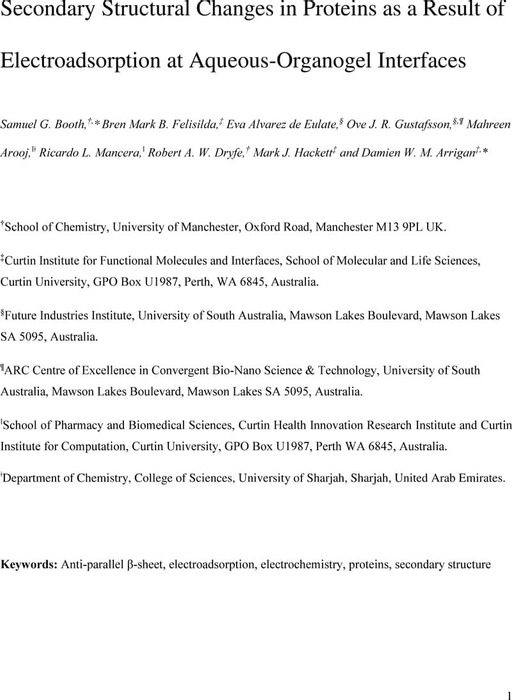 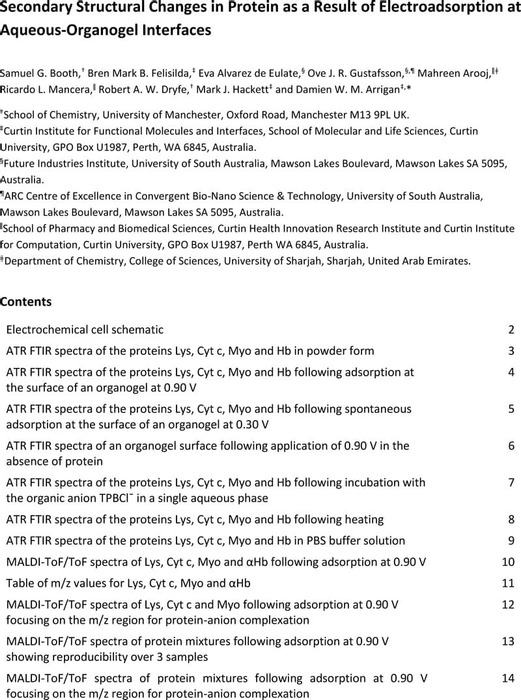 We are encoding your file so that it is compatible across browsers, depending on file size and type this may take some time.
Booth et al chemrxiv 110319 SI