The role of mono-protected amino acid (MPAA) ligands in accelerating enantioselective cyclopalladation and palladium catalyzed C-H func-tionalization was investigated using kinetic, spectroscopic, and computational methods. Single crystal X-ray diffraction and NMR spectroscopy demonstrate that MPAA ligands bind catalytically competent di-palladium complexes as bridging carboxylates. The catalytic relevance of the observed di-palladium species was evaluated by kinetic analysis. The kinetic method of continuous variation demonstrated that a complex contain-ing a single MPAA-bridged di-palladium core (Pd2(MPAA)1) is an active catalyst for the reactions studied. The experimental studies are con-sistent with density functional theory calculations that indicate enantioinduction can be achieved by a single MPAA ligand bridging a di-palladium catalyst through secondary sphere hydrogen-bonding interactions that lower the barrier to C-H activation of the major enantiomer. 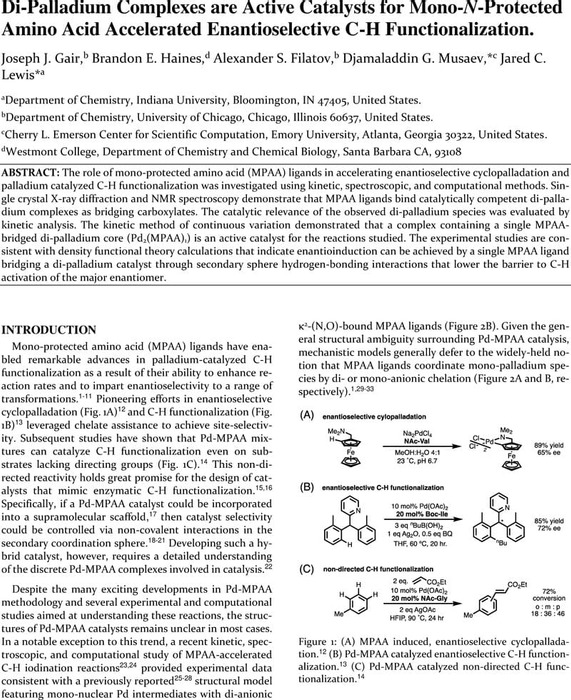 We are encoding your file so that it is compatible across browsers, depending on file size and type this may take some time.
MPAA 02 01

We are encoding your file so that it is compatible across browsers, depending on file size and type this may take some time.
SI 02 01