A time-resolved chemical vapor deposition process for indium nitride (InN) is reported using tris-N,N-dimethyl-N’,N”-diisopropylguanidinatoindium(III) (1) and ammonia plasma at 200 °C. The deposition was self-limiting with respect to the pulse time of 1, indicative of a surface-controlled deposition chemistry. The films were confirmed to be InN by X-ray photoelectron spectroscopy (XPS) and film thicknesses of 10 nm were measured by X-ray reflectivity (XRR), corresponding to a deposition rate of 0.1 nm/cycle. Grazing incidence X-ray diffraction (GIXRD) showed a hexagonal polycrystalline film with a preferred (002) orientation. Morphology studies suggest an island growth mode. The poor thermal stability of 1, previously discussed in the literature, prevented full characterization of the deposition process and the deposition of thicker films. It is concluded that while 1 can act as an In precursor for InN, its poor thermal stability prevents its practical use. 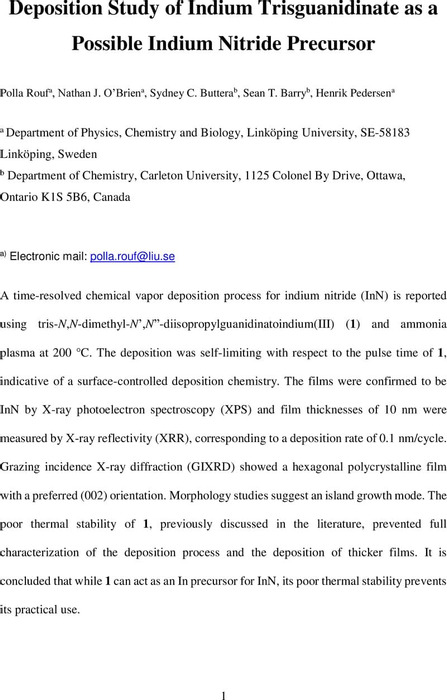 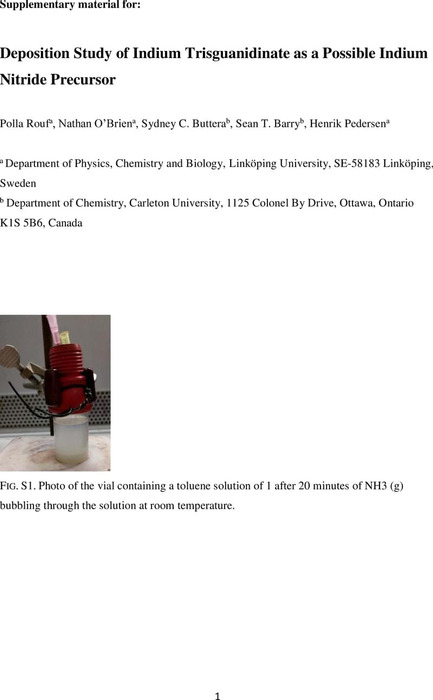 We are encoding your file so that it is compatible across browsers, depending on file size and type this may take some time.
suppl-mater submitted

This project was founded by the Swedish foundation for Strategic Research through the project “Time-resolved low temperature CVD for III-nitrides” (SSF-RMA 15-0018) and by the Knut and Alice Wallenberg foundation through the project “Bridging the THz-gap” (KAW 2013.0049). HP acknowledges the Wenner-Gren foundations and the COST Action MP1402 'Hooking together European research in atomic layer deposition (HERALD) supported by COST (European Cooperation in Science and Technology) for funding for a sabbatical at Carleton University. STB and SCB acknowledge the Vinnova VINNMER Marie Curie incoming mobility program for funding for a sabbatical and research visits to Linköping University (Vinnova grant 2015-03714). HP and STB are very grateful for the networking support provided from the COST Action HERALD.

No conflicts to report