1. Approximately 3.7 million (3,700,103) PubChem compounds were used in training the fragment vectors. Five million compounds (from CID 1 to 5,000,000) were downloaded in SMILES format from PubChem Download Service1 for this purpose. Inorganic part of salts, charges on certain atoms were neutralized, components of mixtures were split and only one chemical from sets of duplicates were kept. Approximately 100,000 chemicals were held out for future needs.

2. Hansen2 and Bursi3 Ames mutagenicity benchmark datasets were used. The data was preprocessed in the same way as the PubChem chemicals, except in the case of duplicates, the compound with the highest mutagenicity value was retained, leaving 6771 compounds (3639 mutagenic and 3132 non-mutagenic).

3. A dataset of 575 compounds was taken from the publication of Ghose et al4 to compute molar refractivity of the fragments.

An in-house dataset5 of 7000 chemicals (Zhu Hao et al) with their experimentally observed LogP was also used to help in computing LogP contribution of the fragments. 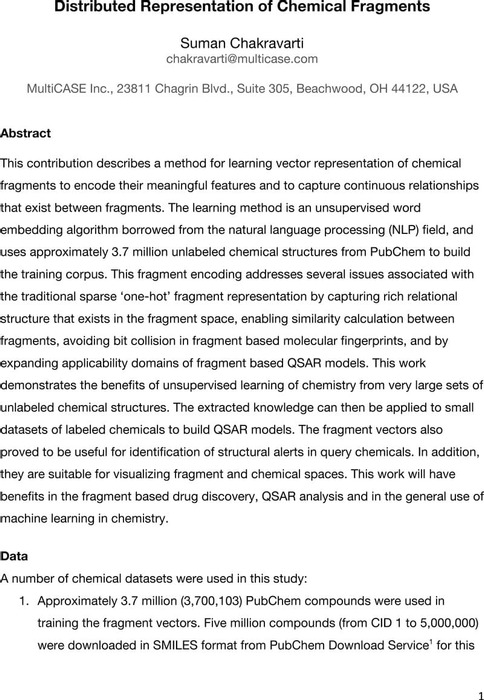 download asset FragVectorsPreprint.pdf 5 MB [opens in a new tab] cloud_download
pdf : 5 MB
We are encoding your file so that it is compatible across browsers, depending on file size and type this may take some time.

The author is employed by MultiCASE Inc.