Artificial metalloenzymes (ArMs) are now commonly used to control the stereoselectivity of catalytic reactions, but controlling ArM chemoselectivity remains challenging. In this study, we engineer a dirhodium ArM to catalyze diazo cross-coupling to form an alkene that, in a one-pot cascade reaction, is reduced to an alkane with high enantioselectivity (typically >99% e.e.) by an alkene reductase. The numerous protein and small molecule components required for the cascade reaction had minimal effect on ArM catalysis, while the dirhodium cofactor itself provided only O-H insertion products from reaction with water and glucose under the same conditions. Directed evolution of the ArM led to improved yields and E/Z selectivities for a variety of substrates, which translated well to cascade reaction yields. MD simulations of ArM variants were used to understand the structural role of the cofactor on large-scale scaffold structural dynamics. These results highlight the ability of ArMs to control both catalyst stereoselectivity and chemoselectivity to enable reactions in complex media that would otherwise lead to undesired side reactions. 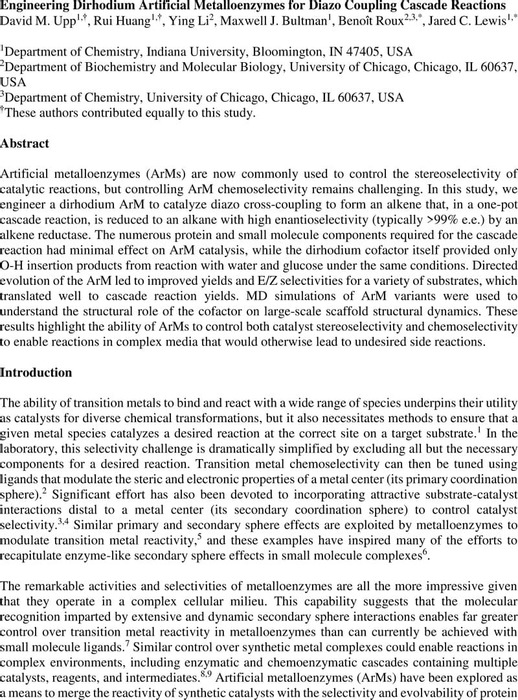 We are encoding your file so that it is compatible across browsers, depending on file size and type this may take some time.
ArM diazo coupling 6 12

We are encoding your file so that it is compatible across browsers, depending on file size and type this may take some time.
ArM diazo coupling SI 6 12