Surface states—the electronic states emerging as a solid material terminates at a surface—are usually vulnerable to contaminations and defects. This fundamental limitation has prohibited systematic studies of the potential role of surface states in surface reactions and catalysis, especially in more realistic environments. Herein, we use selective hydrogenation of cinnamaldehyde (CAL) on platinum-covered titanium oxide ([email protected]) as a prototype reaction, and show that the competitive exchange of extra-introduced species (sodium hydroxide and sodium formate) with spontaneously formed weak bound carbonate and bicarbonate anions at Pt NPs can reconstruct the surface states, which directs the preferred adsorption of the conjugated C=O and C=C double bonds of CAL, and consequently, results in highly efficient synthesis of unsaturated alcohol cinnamyl alcohol (COL) and saturated aldehyde hydrocinnamaldehyde (HCAL) with high selectivity of 98.9% and 99.5%, respectively. Our concept of restructured surface states to tune the chemoselectivity of α, β-unsaturated aldehydes triggered by the selective adsorption of alien molecules may lead to new design principles of heterogeneous catalysts, beyond the conventional d-band theory. 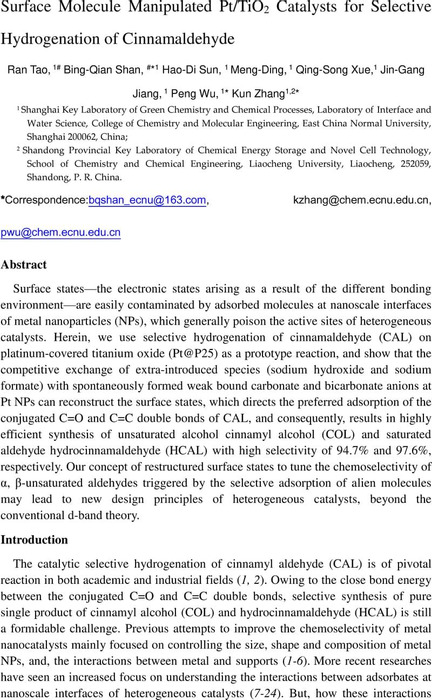 There is no conflict.