Ionic carbon nitrides based on poly(heptazine imides) (PHI) represent a vigorously studied class of materials with possible applications in photocatalysis and energy storage. Herein, we study, for the first time, the photogenerated charge dynamics in highly stable and binder-free PHI photoanodes using in operando transient photocurrents and spectroelectrochemical photoinduced absorption measurements. We discover that light-induced accumulation of long-lived trapped electrons within the PHI film leads to effective photodoping of the PHI film, resulting in a significant improvement of photocurrent response due to more efficient electron transport. While photodoping has been previously reported for various semiconductors, it has never been shown before for carbon nitride materials. Furthermore, we find that the extraction kinetics of untrapped electrons are remarkably fast in these PHI photoanodes, with electron extraction times (ms) comparable to those measured for commonly employed metal oxide semiconductors. These results shed light on the excellent performance of PHI photoanodes in alcohol photoreforming, including very negative photocurrent onset, outstanding fill factor, and the possibility to operate under zero-bias conditions. More generally, the here reported photodoping effect and fast electron extraction in PHI photoanodes establish a strong rationale for the use of PHI films in various applications, such as bias-free photoelectrochemistry or photobatteries. 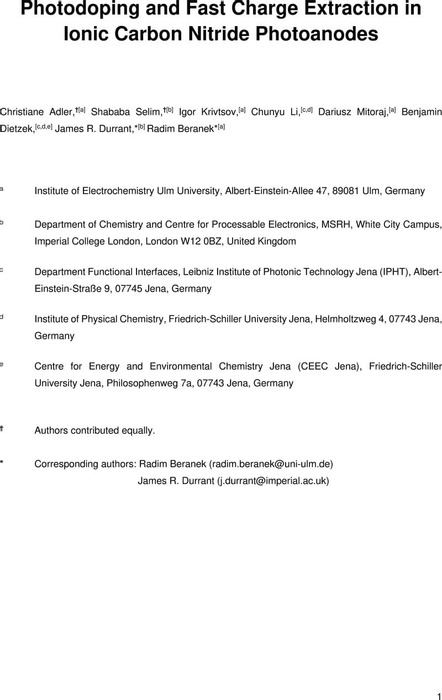