Antioxidant and UV absorption activities of three marine product originated - aaptamine derivatives including piperidine[3,2-b]demethyl(oxy)aaptamine (C1), 9-amino-2-ethoxy-8-methoxy-3H-benzo[de][1,6]naphthyridine-3-one (C2), and 2-(sec-butyl)-7,8-dimethoxybenzo[de]imidazo[4,5,1-ij][1,6]-naphthyridin-10(9H)-one (C3) were theoretically studied by density functional theory (DFT). Direct antioxidant activities of C1–C3 were firstly evaluated via their intrinsic thermochemical properties and radical scavenging activity of the potential antioxidants with the HOO●/HO● radicals via four mechanisms, including: hydrogen atom transfer (HAT), single electron transfer (SET), proton loss (PL) and radical adduct formation (RAF). Kinetic calculation reveals that HOO● scavenging in water is occurred via HAT mechanism with C1 (kapp, 7.13x106 M-1 s-1) while RAF is more dominant with C2 (kapp, 1.40x105 M-1 s-1) and C3 (kapp, 2.90x105 M-1 s-1). Antioxidant activity of aaptamine derivatives can be classified as C1 > C3 > C2. Indirect antioxidant properties based on Cu(I) and Cu(II) ions chelating activity were also investigated in aqueous phase. All three studied compounds show spontaneous and favorable Cu(I) ion chelating activity with DG0 being -15.4, -13.7, and -15.7 kcal.mol-1, whereas DG0 for Cu(II) chelation are -10.4, -10.8, and -2.2 kcal.mol-1 for C1, C2 and C3, respectively. In addition, all compounds show UVA and UVB absorption; in which the excitations are determined mostly as π-π* transition. Overall, the results suggest the potential applications of the aaptamines in pharmaceutics and cosmetics, i.e. as sunscreen and antioxidant ingredient. 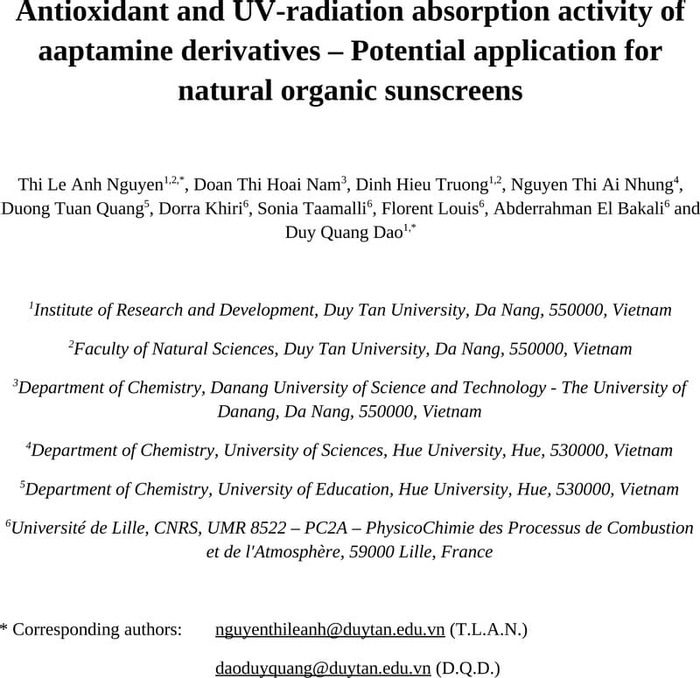 download asset preview.pdf 1 MB [opens in a new tab] cloud_download
pdf : 1 MB
We are encoding your file so that it is compatible across browsers, depending on file size and type this may take some time.

This research is funded by Vietnam National Foundation for Science and Technology Development (NAFOSTED) under grant number 103.01-2019.380. The authors are grateful for the help in kinetic calculation from Dr. Thi Chinh Ngo (Duy Tan University). The authors are also grateful to the Gridchem (www.seagrid.org) for providing computer resources using the Extreme Science and Engineering Discovery Environment (XSEDE) supported by the USA National Science Foundation grant number ACI-10535. Dorra Khiri, Sonia Taamalli, Florent Louis, and Abderrahman El Bakali appreciated the support from the LABEX CaPPA (Chemical and Physical Properties of the Atmosphere), which is funded by the French National Research Agency (ANR) through the PIA (Programme d’Investissement d’Avenir) under contract ANR-11-LABX-0005-01 and also the Regional Council "Hauts de France" and the "European Funds for Regional Economic Development".