The University of Melbourne

Following the work on spin-component and spin-opposite scaled (SCS/SOS) global double hybrids for singlet-singlet excitations by Schwabe and Goerigk [J. Chem. Theory Comput. 2017, 13, 4307-4323] and our own works on new long-range corrected (LC) double hybrids for singlet-singlet and singlet-triplet excitations [J. Chem. Theory Comput. 2019, 15, 4735- 4744; J. Chem. Phys. 2020, 153, 064106], we present new LC double hybrids with SCS/SOS that demonstrate further improvement over previously published results and methods. We introduce new unscaled and scaled versions of different global and LC double hybrids based on Becke88 or PBE exchange combined with LYP, PBE or P86 correlation. For singlet-singlet excitations, we cross-validate them on six benchmark sets that cover small to medium-sized chromophores with different excitation types (local valence, Rydberg, and charge transfer). For singlet-triplet excitations, we perform the cross-validation on three different benchmark sets following the same analysis as in our previous work in 2020. In total, 203 unique excitations are analyzed. Our results confirm and extend those of Schwabe and Goerigk regarding the superior performance of SCS and SOS variants compared to their unscaled parents by decreasing mean absolute deviations, root-mean-square deviations or error spans by more than half and bringing absolute mean deviations closer to zero. Our SCS/SOS variants show to be highly efficient and robust for the computation of vertical excitation energies, which even outperform specialized double hybrids that also contain an LC in their perturbative part. In particular, our new SCS/SOS-ωPBEPP86 and SCS/SOS-ωB88PP86 functional are four of the most accurate and robust methods tested in this work and we fully recommend them for future applications. However, if the relevant SCS and SOS algorithms are not available to the user, we suggest ωB88PP86 as the best unscaled method in this work. 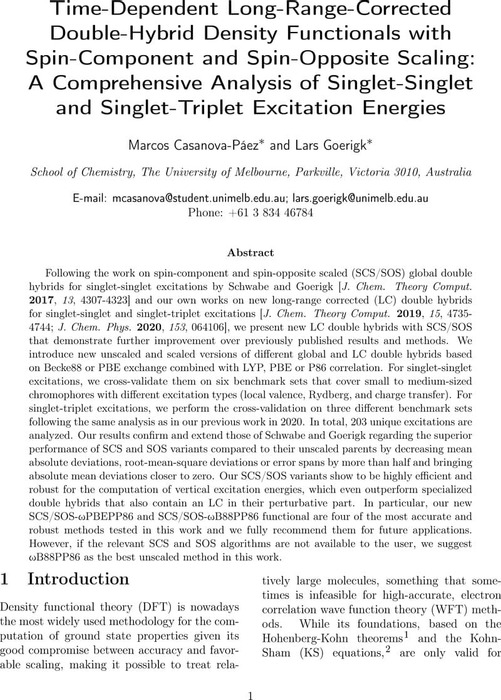 download asset TD-SCS-LRCDHDFs.pdf 1 MB [opens in a new tab] cloud_download
pdf : 1 MB
We are encoding your file so that it is compatible across browsers, depending on file size and type this may take some time.

download asset TD-SCS-LC-DHDFA_SI_Part1_Singlets.xlsx 0.08 MB [opens in a new tab] cloud_download
xlsx : 0.08 MB
We are encoding your file so that it is compatible across browsers, depending on file size and type this may take some time.
TD-SCS-LC-DHDFA SI Part1 Singlets

download asset TD-SCS-LC-DHDFA_SI_Part2_Triplets.xlsx 0.07 MB [opens in a new tab] cloud_download
xlsx : 0.07 MB
We are encoding your file so that it is compatible across browsers, depending on file size and type this may take some time.
TD-SCS-LC-DHDFA SI Part2 Triplets