Au and Pd complexes have emerged as highly effective π-bond cyclization catalysts to construct heterocycles. These cyclization reactions are generally proposed to proceed through multi-step addition-elimination mechanisms involving Au- or Pd-alkyl intermediates. For Au- and Pd-catalyzed allylic diol cyclization, while the DFT potential energy surface landscapes show a stepwise sequence of alkoxylation π-addition, proton transfer, and water elimination, quasiclassical direct dynamics simulations reveal new dynamical mechanisms that depend on the metal center. For Au, trajectories reveal that after π-addition the Au-alkyl intermediate is always skipped because addition is dynamically coupled with proton transfer and water elimination. In contrast, for Pd catalysis, due to differences in the potential-energy landscape shape, only about half of trajectories show Pd-alkyl intermediate skipping. The other half of the trajectories show the traditional two-step mechanism with the intervening Pd-alkyl intermediate. Overall, this work reveals that interpretation of a DFT potential-energy landscape can be insufficient to understand catalytic intermediates and mechanisms and that atomic momenta through dynamics simulations is needed to determine if an intermediate is genuinely part of a catalytic cycle. 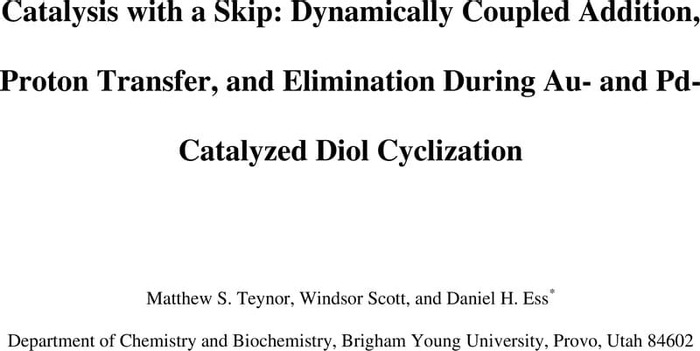