Photosynthetic reaction centers (RCs) from Rhodobacter sphaeroides were engineered to vary the electronic properties of a key tyrosine close to an essential electron transfer component (M210) via its replacement with site-specific genetically encoded noncanonical amino acid tyrosine analogs. High fidelity of noncanonical amino acid incorporation was verified with mass spectrometry and x-ray crystallography and demonstrated that RC variants exhibit no significant structural alterations relative to wild-type. Ultrafast transient absorption spectroscopy indicates the excited primary electron donor, P*, decays via an approximately 4 ps and 20 ps population to produce the charge-separated state P+HA- in all variants. Global analysis indicates that in the 4 ps population P+HA- forms through a 2-step process P* –> P+BA– –> P+HA-, while in the 20 ps population it forms via a 1-step P* –> P+HA– superexchange mechanism. The percentage of P* population that decays via the superexchange route varies from approximately 25% to 45% among variants while in wild-type this percentage is approximately 15%. Increases in the P* population which decays via superexchange correlates with increases in free energy of the P+BA– intermediate caused by a given M210 tyrosine analog. This was experimentally estimated through resonance Stark spectroscopy, redox titrations, and near-infrared absorption measurements. As the most energetically perturbative variant, 3-nitrotyrosine at M210 creates an approximately 110 meV increase in the free energy of P+BA– along with a dramatic diminution of the 1030 nm transient absorption band indicative of P+BA– formation. Collectively this work indicates the tyrosine at M210 tunes the mechanism of primary electron transfer in the RC. 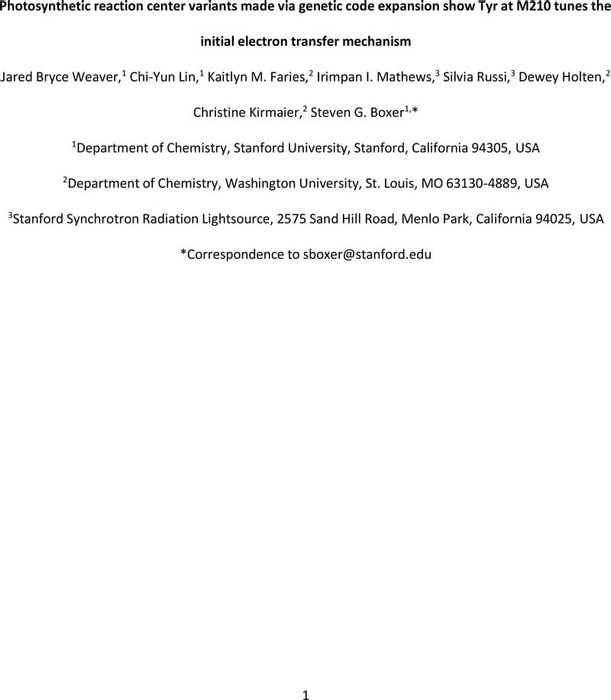 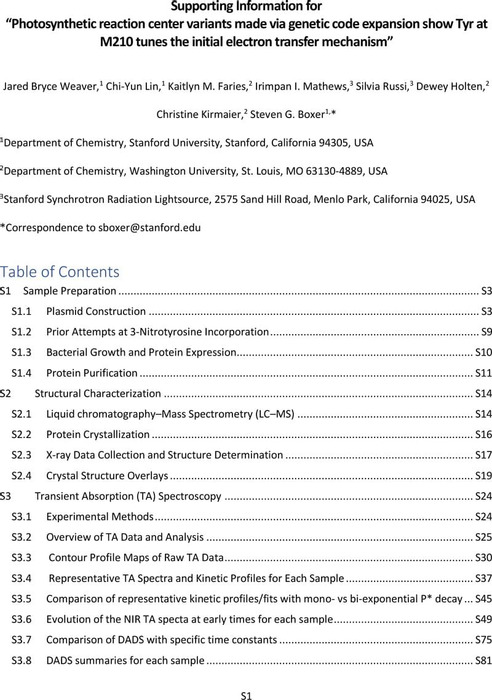 We are encoding your file so that it is compatible across browsers, depending on file size and type this may take some time.
Supporting Information 20210527 ChemRxiv