Observations: This work is not conclusive and is only computational simulations. Under no circumstances should we extrapolate in silico studies into clinical practice, as it would violate medical ethics principles. The main conclusion was that some drugs can be classified as false positives as predicted on the Hit Dexter 2.0 platform. Our main example is ivermectin, where the probability of nonspecificity is extremely high, thus leading to hasty and erroneous conclusions.
SARS-CoV-2 is the seventh coronavirus to infect humans. Currently, there are no pharmacological treatments proven against COVID-19 or that may be of a broad spectrum to minimize the sequelae. This work aims to identify compounds or drugs already commercialized that may be supporting in the treatment of infectious conditions of COVID-19, parallel to the administration of vaccines. In this context, molecular docking simulations were carried out to understand which drugs are most effective in modulating a total of ten receptors, whether directly in viral, pro-inflammatory or central nervous system signaling, related to COVID-19. Subsequently, some results were validated through molecular dynamics simulations based on publicly available trajectory files. Among a total of 71 molecular docking simulations, the drug ledipasvir administered to patients with Hepatitis-C (HCV) was the most promising with a mean value ΔGº ≈ -10.3 kcal · mol-1 and a nonspecific probability according to neural networks of 0.21. Ivermectin, although it had an average affinity of -9.6 kcal · mol-1, was shown to be a ligand with a very expressive degree of nonspecificity of 0.93. When analyzing the atomic fluctuations of molecular dynamics, telaprevir stood out for the large number of rotational freedom in line with expressive RMSF fluctuations with a peak around 20 Å in the interaction with the Spike protein. Consequently, it was shown to be superior to the various anecdotally reported medications, such as nitazoxanide, and that due to the low mobility, the affinity was not so expressive due to the relative high fluctuations of 10 Å. Finally, these results seek to clarify from a theoretical point of view the interaction of numerous medications from viral signaling to the neuroinflammatory system. 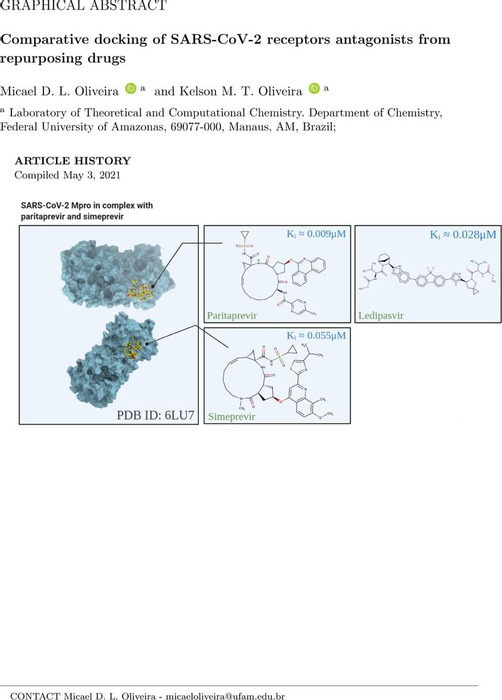 download asset Manuscript (english).pdf 4 MB [opens in a new tab] cloud_download
pdf : 4 MB
We are encoding your file so that it is compatible across browsers, depending on file size and type this may take some time.

download asset virtual_screening.zip 0.12 MB [opens in a new tab] cloud_download
zip : 0.12 MB
We are encoding your file so that it is compatible across browsers, depending on file size and type this may take some time.
virtual screening