The peptide α-helix is right-handed when containing amino acids with L-chirality, and left-handed with D-chirality, however mixed chirality peptides generally do not form α-helices unless the non-natural residue amino-isobutyric acid is used as helix inducer. Herein we report the first X-ray crystal structures of mixed chirality α-helices in short peptides comprising only natural residues at the example of a stapled bicyclic and a linear membrane disruptive amphiphilic antimicrobial peptide (AMP) containing seven L- and four D-residues, as complexes of fucosylated analogs with the bacterial lectin LecB. The mixed chirality α-helices are superimposable to their parent homochiral α-helices and form under similar conditions as shown by CD spectra and MD simulations but are resistant to proteolysis. The observation of mixed chirality α-helix with only natural residues in the protein environment of LecB suggests a vast unexplored territory of α-helical mixed chirality sequences and their possible use for optimizing bioactive α-helical peptides. 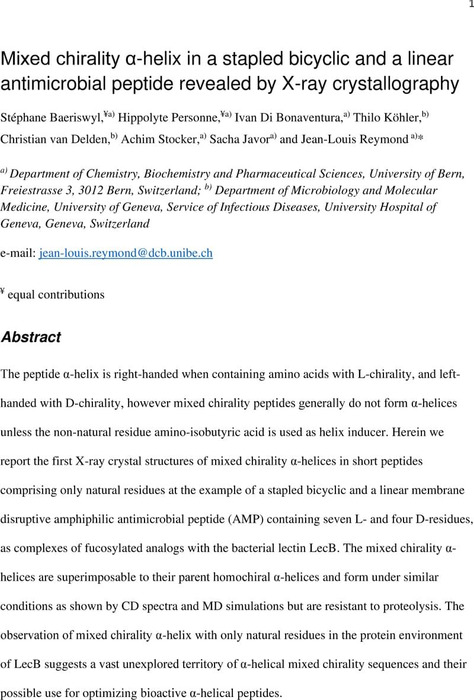 download asset Mixed chirality-v3.pdf 7 MB [opens in a new tab] cloud_download
pdf : 7 MB
We are encoding your file so that it is compatible across browsers, depending on file size and type this may take some time.