Structure, in Vivo Detection and Anti-Bacterial Activity of Metabolites of SQ109, an Anti-Infective Drug Candidate

SQ109 is a drug candidate for the treatment of tuberculosis (TB). It is thought to target primarily the protein MmpL3 in Mycobacterium tuberculosis, but it also inhibits the growth of some other bacteria, as well as fungi and protozoa. SQ109 is metabolized by the liver, and it has been proposed that some of its metabolites might be responsible for its activity against TB. Here, we synthesized six potential P450 metabolites of SQ109 and used these as well as 10 other likely metabolites as standards in a mass spectrometry study of M. tuberculosis-infected rabbits treated with SQ109, in addition to testing all 16 putative metabolites for anti-bacterial activity. We found that there were just two major metabolites in lung tissue: a hydroxy-adamantyl analog of SQ109 and N’-adamantylethylenediamine. Neither of these, or the other potential metabolites tested, inhibited the growth of M. tuberculosis, or of M. smegmatis, Bacillus subtilis or E. coli, making it unlikely that an SQ109 metabolite contributes to its anti-bacterial activity. In the rabbit TB model, it is thus the gradual accumulation of non-metabolized SQ109 in tissues to therapeutic levels that leads to good efficacy. Our results also provide new insights into how SQ109 binds to its target MmpL3, based on our mass spectroscopy results which indicate that the charge in SQ109 is primarily localized on the geranyl nitrogen, explaining the very short distance to a key Asp found in the X-ray structure of SQ109 bound to MmpL3. Our results also suggest that it is intact SQ109 that is likely to target some of the other bacteria, fungi and protozoa in which MmpL3-like proteins have recently been reported. 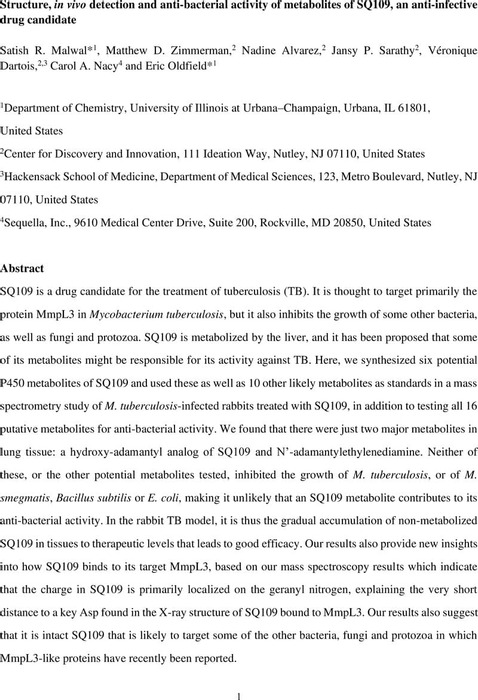 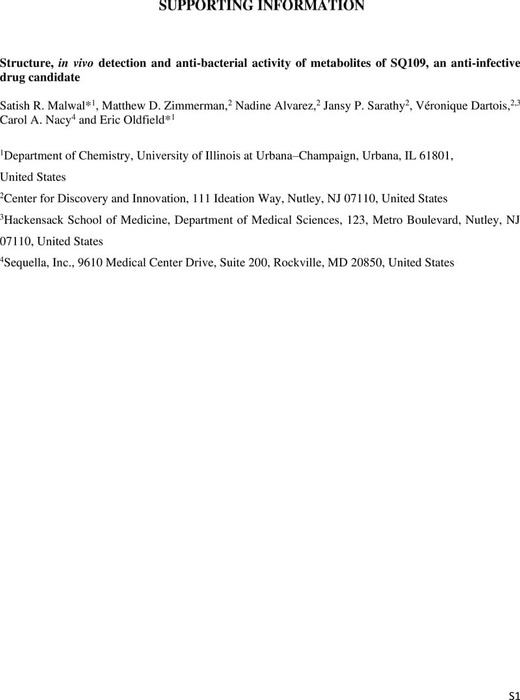 We are encoding your file so that it is compatible across browsers, depending on file size and type this may take some time.
SQ109 Metabolites SI