Barium-exchanged reduced pore zorite (Ba-RPZ) is a titanosilicate molecular sieve that is able to separate CH4 from N2 based on their relative molecular sizes. A detailed study of N2 and CH4 adsorption equilibrium and diffusion on Ba-RPZ was completed using low and high-pressure volumetry. Adsorption equilibrium data for Ba-RPZ from limiting vacuum to 1.2 bar were measured at 30, 40, and 50° C for CH4 and at 30, 50, and 70° C for N2. Constant volume uptake experiments were conducted to estimate the diffusivities of CH4 at 30, 40, and 50° C and N2 -20, -10, and 0° C. Similar experiments were carried out with zeolite 4A to validate the methods used in this study. On the one hand, the transport of N2 in Ba-RPZ was found to be controlled by diffusion in the micropores. On the other hand, the transport of CH4 in Ba-RPZ was described by a dual-resistance model, including a barrier resistance and micropore diffusional resistance. Both the barrier and micropore diffusion coefficients demonstrated concentration dependence. While the micropore diffusion constant followed Darken's relationship, the barrier resistance did not. A concentration-dependent dual-resistance diffusion model for methane was constructed and validated using experimental data across a range of pressures and temperatures. The concentration-dependent dual-resistance model was able to describe the complex diffusion behaviour methane displays as it progressed from the dual-resistance controlled region to the micropore-controlled region of the isotherm. The calculated CH4/N2 kinetic selectivity of Ba-RPZ was shown to be significantly larger than the current benchmark material for CH4/N2 separation.

This is the Ver 1 of the Manuscript 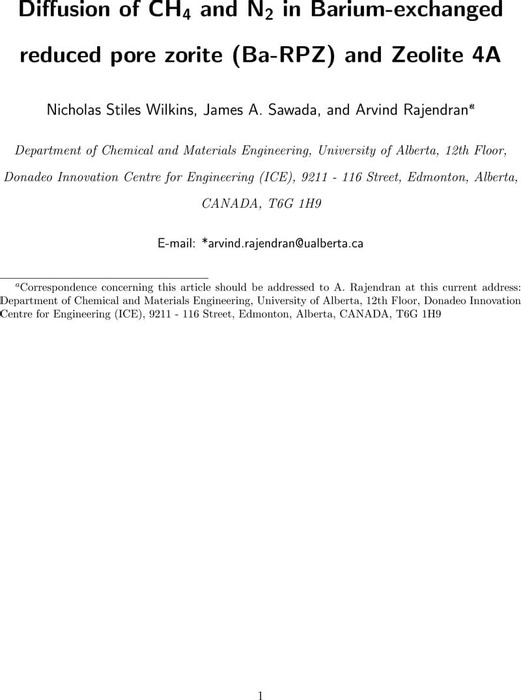 download asset Ba-RPZVer2_AddedMay8_2021.pdf 4 MB [opens in a new tab] cloud_download
pdf : 4 MB
We are encoding your file so that it is compatible across browsers, depending on file size and type this may take some time. 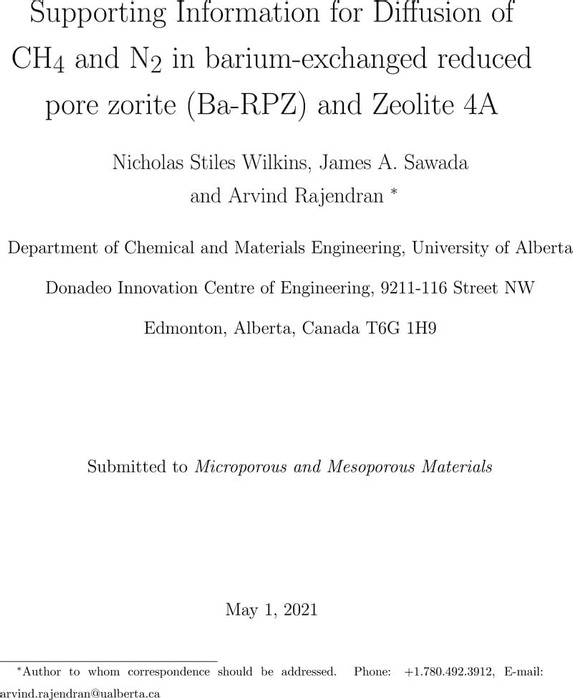 download asset BaRPZSupportingInfo.pdf 3 MB [opens in a new tab] cloud_download
pdf : 3 MB
We are encoding your file so that it is compatible across browsers, depending on file size and type this may take some time.
BaRPZSupportingInfo