We use cookies to distinguish you from other users and to provide you with a better experience on our websites. Close this message to accept cookies or find out how to manage your cookie settings. Learn more about our Privacy Notice... [opens in a new tab]
Energy
search

The implementation of alkali metal anodes in practical batteries have been unsuccessful due to major safety concerns related to dendritic growth and thermal runaway. Carbon scaffolds have been utilized as promising host materials in an effort to improve battery safety and performance. Herein, “lean” lithium and sodium composite anodes, using a semi-crystalline carbon nanofiber (CNF) host material with limited surface functionalization, are utilized to investigate the relationship between the structural characteristics of the CNF and lithium/sodium metal. Symmetric testing reveals that the Na-CNF composite anode maintains stable cycling performance, with minimal hysteresis increase over 2000 hours, whereas Li-CNF fails before 200 hours. When paired with layered oxide cathodes (NaNi0.33Fe0.3Mn0.33Ti0.04O2 and LiNi0.6Mn0.2Co0.2O2 for sodium and lithium cells, respectively) and cycled at 1C, the Na-CNF cells maintain 75% capacity retention after 500 cycles, but the Li-CNF cells fail shortly after 140 cycles. The primary factor enabling stable long-term cycling for Na-CNF cells is that Na ion undergoes reversible ion intercalation, whereas Li ion is limited to surface adsorption. The inherent carbon crystallinity is found to govern the interaction between the carbon host and alkali metals and is a primary factor in the sustainability and performance of the metal composite anodes. 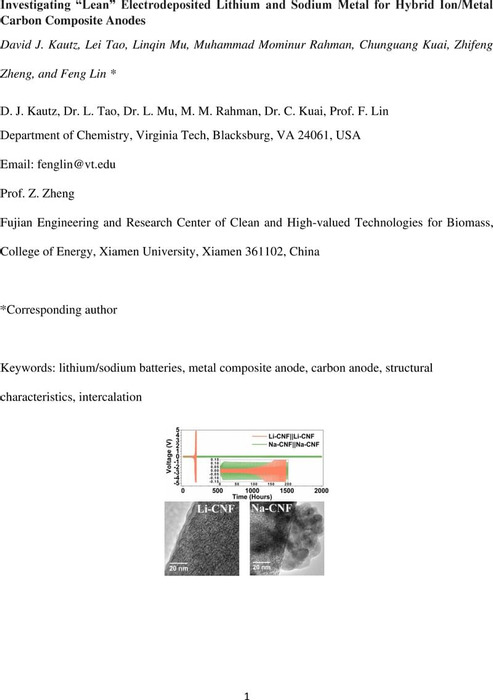