Silica-based materials including zeolites are commonly used for wide ranging applications including separations and catalysis.
Substrate transport rates in these materials often significantly influence the efficiency of such applications.
Two factors that contribute to transport rates include
1) the porosity of the silicate matrix and
2) non-bonding interactions between the diffusing species and the silicate surface.
Here, we utilize computer simulation to resolve the relative contribution of these factors to effective methane transport rates in a silicate channel.
Specifically, we develop a `homogenized' model of methane transport valid at micron and longer length scales that incorporates atomistic-scale kinetic information.
The atomistic-scale data are obtained from extensive molecular dynamics simulations that yield local diffusion coefficients and potentials of mean force.
With this model, we demonstrate how nuances in silicate hydration and silica/methane interactions impact 'macroscale' methane diffusion rates in bulk silicate materials.
This hybrid homogenization/molecular dynamics approach will be of general use for describing small molecule transport in materials with detailed molecular interactions. 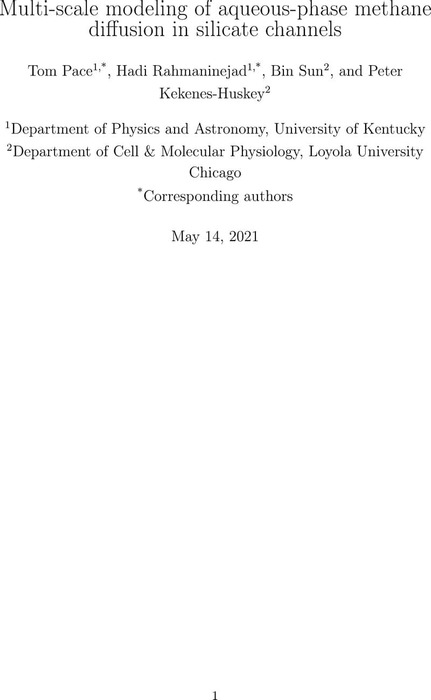 No conflicts of interest