Aroma persistence plays a major role in the liking and wanting of orally consumed products (food, dental toiletries, tobacco, drugs, etc.). Here, we use an integral approach including ex vivo experiments using a novel model of oral mucosa and saliva in well controlled conditions as well as in vivo dynamic instrumental and sensory experiments. Ex vivo experiments show the ability of the mucosal pellicle, the thin layer of salivary proteins covering the oral mucosa, to interact with aroma compounds, as well as the ability of oral cells and saliva to metabolize carbonyl aroma compounds. In vivo evaluation of the exhaled air and perception of individuals after aroma sample consumption confirm ex vivo findings in a more real context. Thus, aroma compounds susceptible to be metabolized by saliva and oral cells show a lower aroma persistence than non metabolized compounds, for which other mechanisms such as the adsorption at the surface of the oral mucosa (mucosal pellicle) as a function of their hydrophobicity are involved. Thus, we argue that the physiological aspects occurring during the oral processing, and especially, metabolization of aroma compounds, have to be considered when studying the phenomenon of aroma persistence. 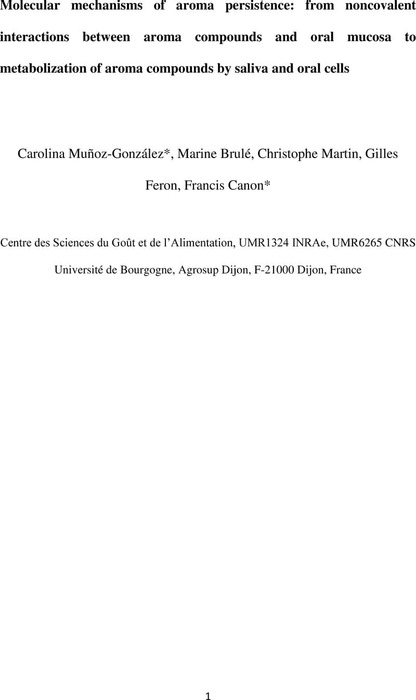 We are encoding your file so that it is compatible across browsers, depending on file size and type this may take some time.
Supplementary material