Long-lived organic radicals are promising candidates for the development of high-performance energy solutions such as organic redox batteries, transistors, and light-emitting diodes. However, “stable” organic radicals that remain unreactive for an extended time and that can be stored and handled under ambient conditions are rare. A necessary but not sufficient condition for organic radical stability is the presence of thermodynamic stabilization, such as conjugation with an adjacent p-bond or lone-pair, or hyperconjugation with a s-bond. However, thermodynamic factors alone do not result in radicals with extended lifetimes: many resonance-stabilized radicals are transient species that exist for less than a millisecond. Kinetic stabilization is also necessary for persistence, such as steric effects that inhibit radical dimerization or reaction with solvent molecules. We describe a quantitative approach to map organic radical stability, using molecular descriptors designed to capture thermodynamic and kinetic considerations. The comparison of an extensive dataset of quantum chemical calculations of organic radicals with experimentally-known stable radical species reveals a region of this feature space where long-lived radicals are located. These descriptors, based upon maximum spin density and buried volume are combined into a single metric, the Radical Stability Score, that outperforms thermodynamic scales based on bond dissociation enthalpies in identifying remarkably long-lived radicals. This provides an objective and accessible metric for used in future molecular design and optimization campaigns.

We demonstrate this approach in identifying Pareto-optimal candidates for stable organic radicals. 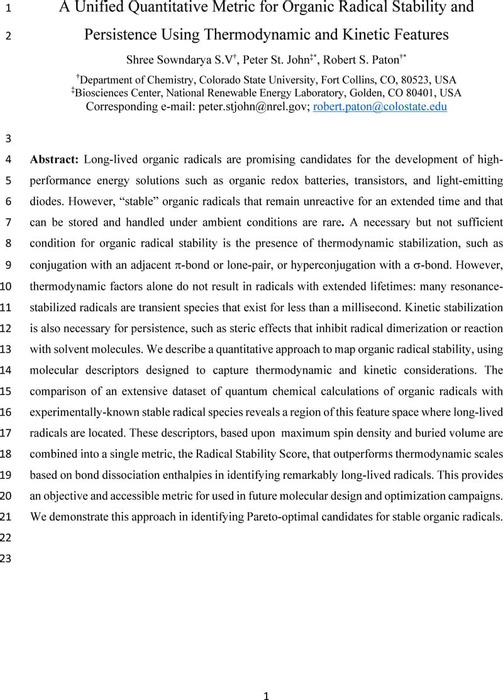 We are encoding your file so that it is compatible across browsers, depending on file size and type this may take some time.
Sowndarya Radical Stability Score SI