Fluorogenic hybridization probes allow the detection of RNA and DNA sequences in homogeneous solution. Typically, one target molecule is activating the fluorescence of a single probe molecule. This limits the sensitivity of nucleic acid detection. Herein, we report a self-immolative Molecular Beacon (iMB), which escapes the one-target-one-probe dogma. The iMB probe includes a photoreductively cleavable N-alkylpicolinium (NAP) linkage within the loop region. A fluorophore at the 5'-end serves, on the one hand, as a reporter group and, on the other hand, as a photosensitizer of a NAP-linker cleavage reaction. In the absence of a target, the iMB adopts a hairpin shape. Quencher proups prevent photo-induced cleavage. The iMB opens upon hybridization with target, and both fluorescent emission as well as photo-inductive cleavage of the NAP-linker can occur. In contrast to previous chemical amplification probes, iMBs are unimolecular. Cleavage leads to products that have lower target affinity than the probes before reaction. Aided by catalysis, the method allowed the detection of 5 pM RNA target within 100 min. 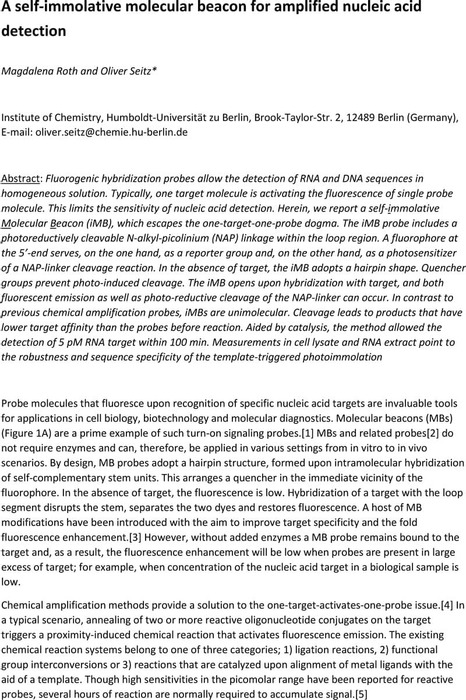 download asset iMB_Roth_Seitz.pdf 0.38 MB [opens in a new tab] cloud_download
pdf : 0.38 MB
We are encoding your file so that it is compatible across browsers, depending on file size and type this may take some time. 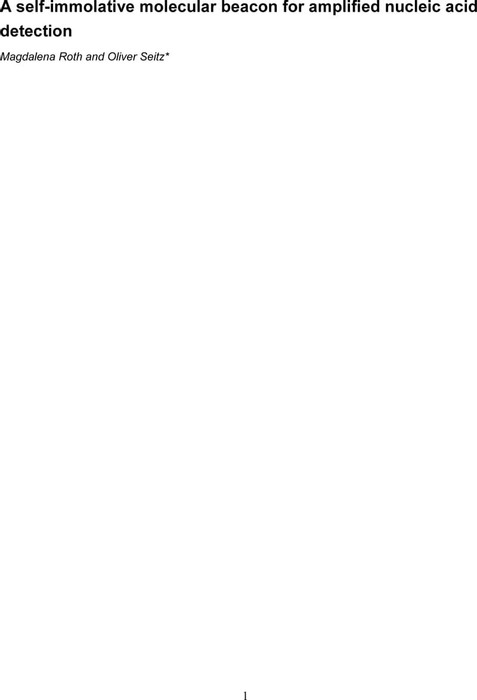 download asset iMB_Roth_Seitz_SI.pdf 1 MB [opens in a new tab] cloud_download
pdf : 1 MB
We are encoding your file so that it is compatible across browsers, depending on file size and type this may take some time.
iMB Roth Seitz SI