There is intense interest in utilizing the redox activity of Organic Mixed Ionic Electronic Conductors for faradaic chemical sensing. In particular, the investigation of organic electrochemical transistors (OECTs) as biosensors due to their low operational potentials, ease of fabrication (e.g. by inkjet printing), biocompatibility, and large transconductance.

It has become common practice in the OECT community to combine both chemical detection and transistor function within the same compartment, assuming that the sensor signal is amplified seamlessly by the sensing OECT. These devices however routinely encounter several challenges whose origins often remained unclear. Some of these challenges are 1) small changes in drain current, contradicting OECT’s oft-touted current-amplifying abilities. 2) Irreversible chemical changes to the semiconducting polymer electrodes. 3) Parasitic side reactions convoluting the sensing signal, exacerbated by applied voltages.

In this manuscript, we show that optimization of OECT-based sensors requires more rigorous characterization of electrode potentials to elucidate electrochemical phenomena, a practice that is often largely absent in current reports. Our analysis of fundamental device physics of various OECT architectures shows that despite what a large fraction of the organic bioelectronics community still believes, amperometric OECTs either 1) do not display any transistor behavior, and in fact operate merely as electrodes or 2) Undergo irreversible changes and are extremely complex to calibrate, or both 1) and 2).

Indeed, to fully utilize the OECT’s large transconductance, a separate 2-electrode Reaction Cell which is utilized to gate a separate OECT is needed (RC-OECT). In this manuscript, in addition to showing that the RC-OECT resolves the fundamentally and irreconcilably contradicting design principles of amperometric OECTs, we demonstrate that it provides great device and materials design flexibility. Finally, we elucidate the basic principles on how to further optimize the RC-OECT.

We believe that our findings will be of great interest to researchers in the fields of bioelectronics as a call to action to re-evaluate present approaches of utilizing OECTs for chemical detection and to help practitioners select materials and designs to optimize redox sensors based on organic semiconductors. 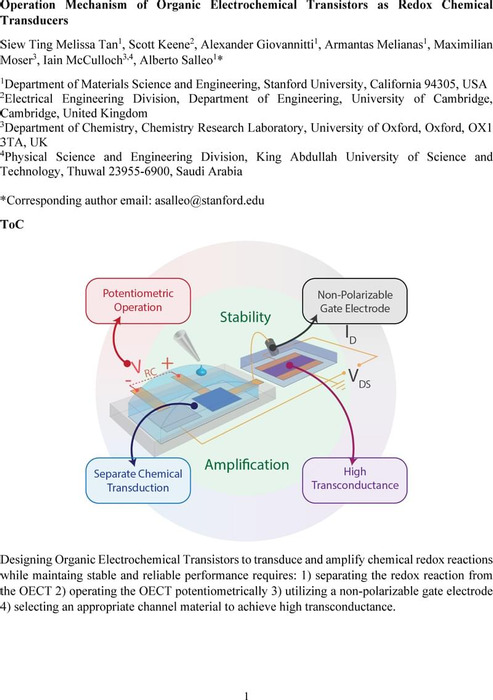