Lipid Transporters: From Bacteria, Protozoa, Fungi and Plants, to Mice and Men

The tuberculosis drug candidate SQ109 targets the trehalose monomycolate transporter MmpL3 in Mycobacterium tuberculosis and also has activity against other pathogens. We found related proteins in 22 protozoa, including Trypanosoma cruzi and Entamoeba histolytica, as well as in archaea and other bacteria, including the fatty acid transporter, FarE. We show these proteins, alpha-MMPL proteins, adopt similar structures to that of MsMmpL3 having two sets (P1 and P2) of conserved active site/H+-transporter Asp, Tyr and Phe residues in “pentad” motifs (DYxxF) that can bind to the SQ109 ethylenediamine and adamantyl moieties. Based on structural comparisons with MsMmpL3, we find that there are superimposable transmembrane and H+-transporter structures in much larger proteins, beta-MMPLs, found in apicomplexan parasites, fungi, plants and animals. They also contain double “pentad” motifs in which the P1 Asp is totally conserved, but the P2 Asp may also be a Glu, and the P2 Phe seen in the alpha-MMPLs is a His that H-bonds to the P1 and P2 Asp/Glu residues. There are also 5 conserved Ser/Thr residues that extend the H-bond/H+-transporter network with 2 interacting directly with the P1 Asp, and the His. We propose that all MMPL proteins are involved in proton motive force-mediated lipid (phospholipid, glycolipid, sterol, fatty acid) transport, and that SQ109 may target some pathogens directly, by binding to the P1/P2 motifs. Overall, the results are of general interest since they indicate that there are two major classes of lipid transporters: alpha-MMPL proteins found in many bacteria and protozoa, and much larger, beta-MMPL proteins, found in fungi, apicomplexa, plants and animals and, in some cases, they are potential drug targets. 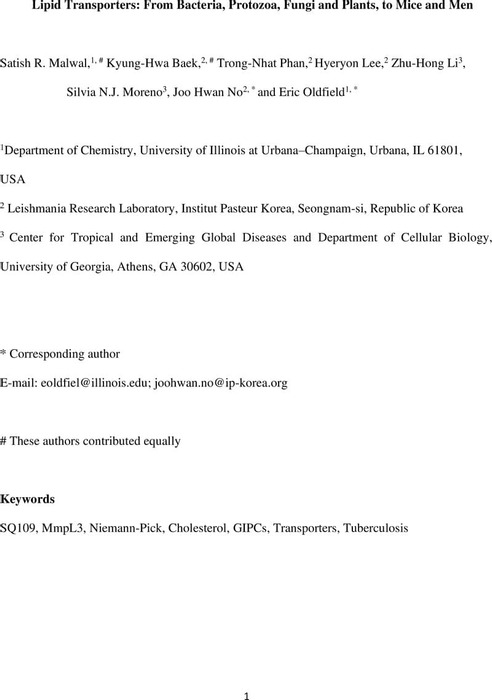 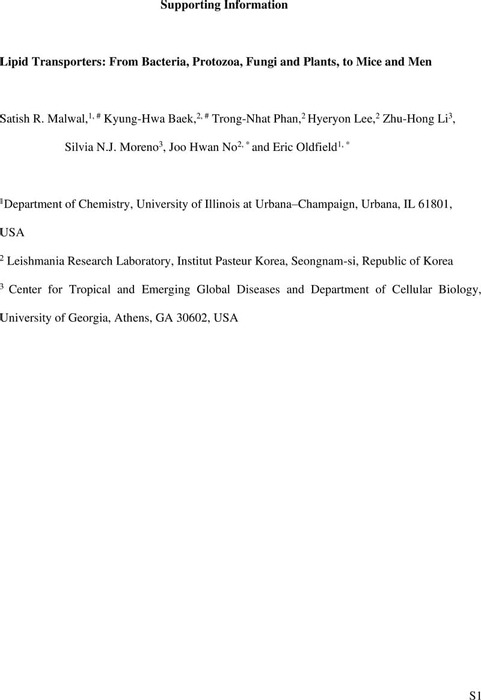 We are encoding your file so that it is compatible across browsers, depending on file size and type this may take some time.
MMPLs SI