Activating Power of the Phosphopantetheine Arm in α-Oxoamine Synthase Catalysis

PLP-dependent enzymes are attractive biocatalysts due to their ability to perform complexity building transformations on amine-containing, readily available substrates from the chiral pool such as amino acids. Although many classes of PLP-dependent enzymes are routinely employed in synthesis, select families remain underutilized due to limitations in practical scalability. For example, some PLP-dependent enzymes act on prohibitively expensive substrates such as coenzyme A-bound substrates. To address this challenge, we have investigated the mechanism of action of coenzyme A in gating catalysis of one α-oxoamine synthase, SxtA AOS. Through investigation of the reactivity of SxtA AOS with panels of substrates and in the presence of various coenzyme A mimics as well as monitoring PLP absorbances and the behavior of SxtA AOS variants, we have determined that activity is gated through the binding of the eastern phosphodiester group by the residue Arg142 that is located in a tunnel that leads to the active site. To circumvent this gating mechanism, a synthetic CoA mimic additive was designed that allows for enhanced reactivity with non-CoA substrates. These findings outline a strategy for employing AOS enzymes without the need for cost-prohibitive coenzyme A substrates. 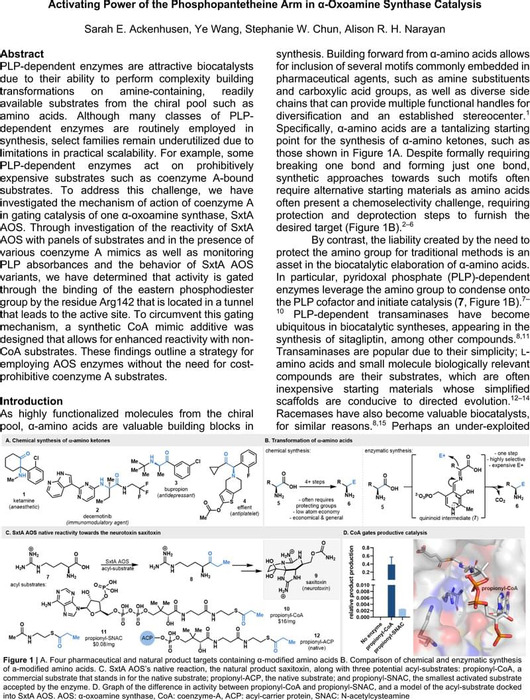 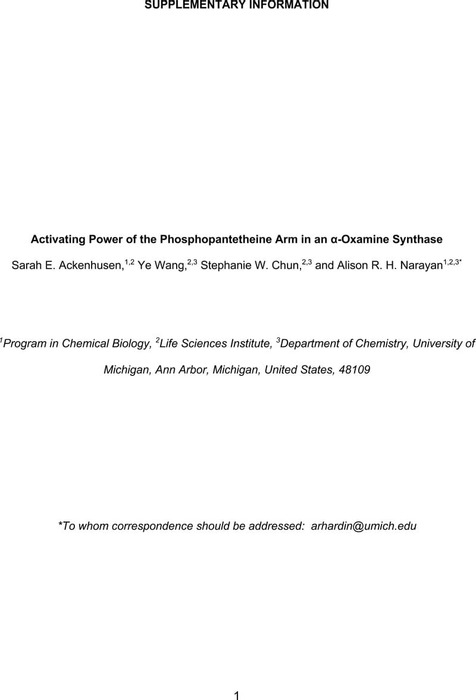 We are encoding your file so that it is compatible across browsers, depending on file size and type this may take some time.
AOS SI Ackenhusen