In the context of deep-tissue disease biomarker detection and analyte sensing of biologically relevant species, the impact of photoacoustic imaging has been profound. However, most photoacoustic imaging agents to date are based on the repurposing of existing fluorescent dye platforms that exhibit non-optimal properties for photoacoustic applications (e.g., high fluorescence quantum yield). Herein, we introduce two effective modifications to the hemicyanine dye to afford PA-HD, a new dye scaffold optimized for photoacoustic probe development. We observed a significant increase in the photoacoustic output, representing an increase in sensitivity of 4.8-fold and a red-shift of the λabs from 690 nm to 745 nm to enable ratiometric imaging. Moreover, to demonstrate the generalizability and utility of our remodeling efforts, we developed three probes using common analyte-responsive triggers for beta-galactosidase activity (PA-HD-Gal), nitroreductase activity (PA-HD-NTR), and hydrogen peroxide (PA-HD-H2O2). The performance of each probe (responsiveness, selectivity) was evaluated in vitro and in cellulo. To showcase the enhance properties afforded by PA-HD for in vivo photoacoustic imaging, we employed an Alzheimer’s disease model to detect H2O2. In particular, the photoacoustic signal at 735 nm in the brains of 5xFAD mice (a murine model of Alzheimer’s disease) increased by 1.72 ± 0.20-fold relative to background indicating the presence of oxidative stress, whereas the change in wildtype mice was negligible (1.02 ± 0.14). These results were confirmed via ratiometric calibration which was not possible using the parent HD platform. 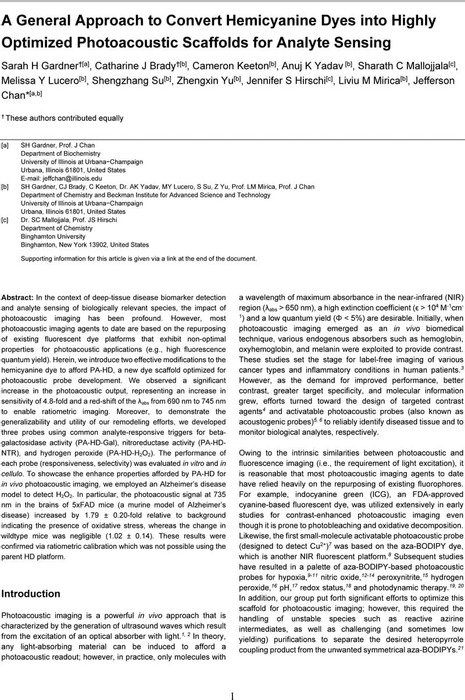 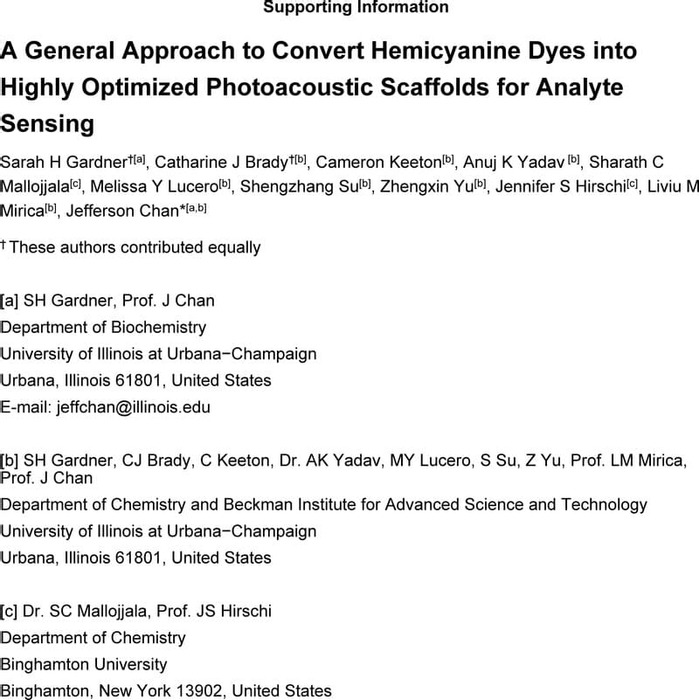 We are encoding your file so that it is compatible across browsers, depending on file size and type this may take some time.
ChemRxiv PA-HD SI FINAL