Among metals used for CO2 electroreduction in water, Cu appears to be unique in its ability to produce C2+ products like ethylene. Bimetallic combinations of Cu with other metals have been investigated with the goal of steering selectivity via creating a tandem pathway through the CO intermediate or by changing the surface electronic structure. Here, we demonstrate a facile cation exchange method to synthesize Ag/Cu electrocatalysts for CO2 reduction using Cu sulfides as a growth template. Beginning with Cu2−xS nanosheets (C?nano-0, 100 nm lateral dimension, 10 nm thick), varying the Ag+ concentration in the exchange solution produces a gradual change in crystal structure from Cu7S4 to Ag2S, as the Ag/Cu mass ratio varies from 0.1 to 10 (CA-nano-x, x indicating increasing Ag fraction). After cation exchange, the nanosheet morphology remains but with increased shape distortion as the Ag fraction is increased. Interestingly, the control (C-nano-0) and cation exchanged nanosheets have very high Faradaic efficiency for producing formate at low overpotential (−0.2 V vs. RHE). The primary effect of Ag incorporation is increased production of C2+ products at −1.0 V vs. RHE compared with C-nano-0, which primarily produces formate. Cation exchange can also be used to modify the surface of Cu foils. A two-step electro-oxidation/sulfurization process was used to form Cu sulfides on Cu foil (C-foil-x) to a depth of a few 10s of microns. With lower Ag+ concentrations, cation exchange produces uniformly dispersed Ag; however, at higher concentrations, Ag particles nucleate on the surface. During CO2 electroreduction testing, the product distribution for Ag/Cu sulfides on Cu foil (CA-foil-x-y) changes in time with an initial increase in ethylene and methane production followed by a decrease as more H2 is produced. The catalysts undergo a morphology evolution towards a nest-like structure which could be responsible for the change in selectivity. For cation-exchanged nanosheets (CA-nano-x), pre-reduction at negative potentials increases the CO2 reduction selectivity compared to tests of as-synthesized material, although this led to the aggregation of nanosheets into filaments. Both types of bimetallic catalysts are capable of selective reduction of CO2 to multi-carbon products, although the optimal configurations appear to be metastable. 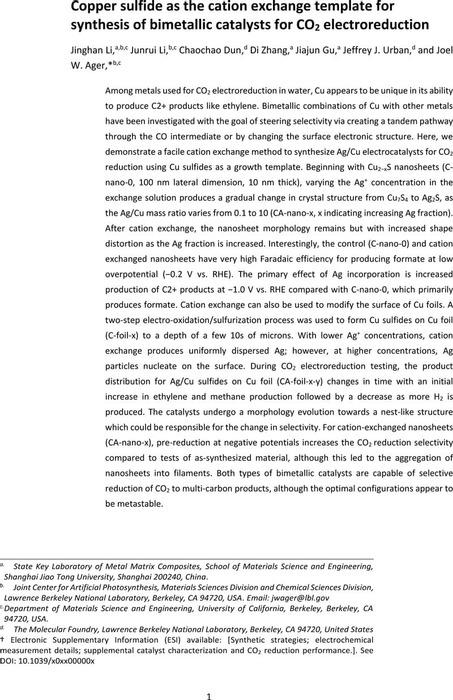 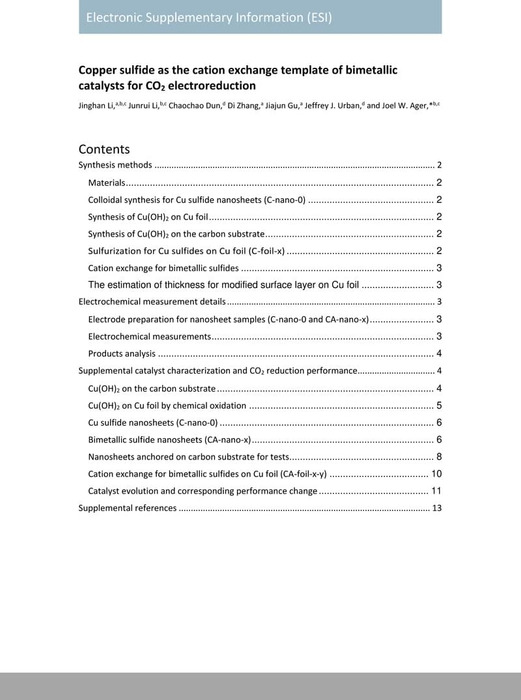 We are encoding your file so that it is compatible across browsers, depending on file size and type this may take some time.
Cation exchange E-CO2R ESI ChemRxiv Final

There are no conflicts to declare