Charge-Transfer Promoted Fixation of Glyphosate on TiO2 - a Multiscale Approach

In the present manuscript we used atomistic simulation methodsto investigate the adsorption of GGG on the titania rutile-(110)surface. The molecule showed a high adsorption to the surface es-pecially in its bidentate-⊥mode. This configuration was furtherinvestigated both in terms of charge transfer and strain analysis.In the first case a transfer of roughly one electron was observedfrom the functional groups binding to the surface atoms, leavingthe molecule at the phosphate and carboxylic groups. This chargeis distributed into the rutile’s bulk, where it gets then dissipated.To get a hint on the location of the bond break, the strain analysis identified the C-C bond as the major strain location. This presump-tion can not be confirmed in this work. In order to understand pho-tocaltalytic degradation of GGG in further investigations, a clustermodel was developed for TD-DFT simulations. The cluster simu-lations are in good agreement with the DFT simulations in termsof ground state properties (band gap and HOMO-levels) as well as geometrically optimized structures.
Here not only the DOS showeda reduction of the band gap upon adsorption, but also the TD-DFTspectrum lied in the same regime. Hence, there is a high likelihoodfor GGG to proceed in a photocatalytic reaction 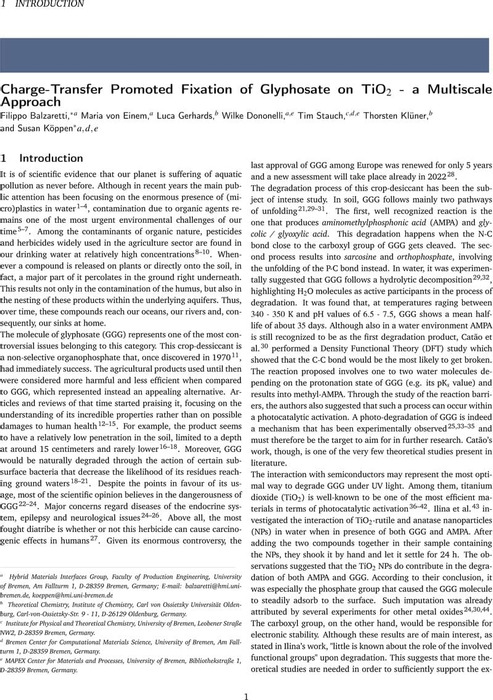