A Reactivity First Approach to Autonomous Discovery of New Chemistry

We present a robotic chemical discovery system capable of learning the generalized notion of reactivity using a neural network model that can abstract the reactivity from the identity of the reagents. The system is controlled using an algorithm that works in conjunction with this learned knowledge, the robot was able to autonomously explore a large number of potential reactions and assess the reactivity of mixtures, including unknown datasets, regardless the identity of the starting materials. The system identified a range of chemical reactions and products, some of which were well-known, some new but predictable from known pathways, but also some unpredictable reactions that yielded new molecules. The search was done within a budget of 15 inputs combined in 1018 reactions, which allowed us not only to discover a new photochemical reaction, but also a new reactivity mode for a well-known reagent (p-toluenesulfonylmethyl isocyanide, TosMIC). This involved the reaction of six equivalents of TosMIC in a ‘multi-step, single-substrate’ cascade reaction yielding a trimeric product in high yield (47% unoptimized) with formation of five new C-C bonds involving sp-sp2 and sp-sp3 carbon centres. Analysis reveals that this transformation is intrinsically unpredictable, demonstrating the possibility of reactivity-first robotic discovery of unknown reaction methodologies without requiring human input.

This it the first version. 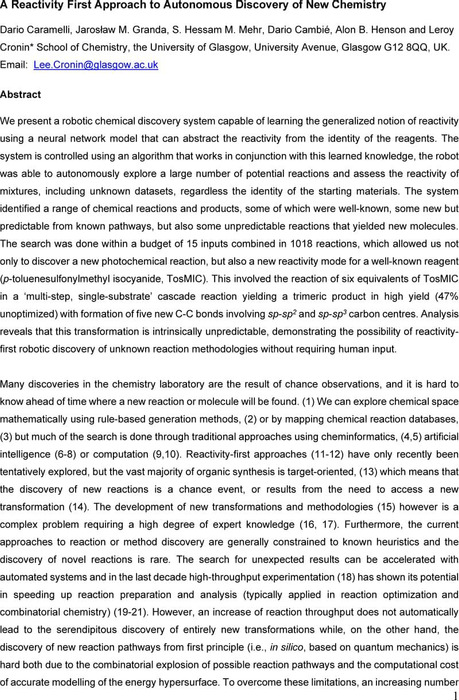