13C-enrichment of furan by custom synthesis followed by modest-pressure synthesis of 13C-enriched nanothreads enabled a detailed characterization of the reaction products by a full complement of advanced solid-state NMR techniques, with validation by ab initio calculation of chemical shifts. The 13C NMR spectrum was complex, with more than a dozen distinct features, but almost all (> 95%) represented CH moieties are as expected in nanothreads, with only 2–4% CH2, 0.3% C=O, and 0.3% COO groups, according to spectral editing. Different components were quantified by integration of the fully equilibrated direct-polarization spectrum. Symmetric and asymmetric alkene-containing rings as well as trapped furan were identified by 13C-13C and 1H-13C NMR. The most intriguing component observed was fully saturated perfect anti furan-derived nanothread segments, with two distinct, sharp peaks, accounting for ca. 10% of the material. The bonding patterns in these periodic structures deduced from DQ/SQ NMR was that of a [4+2] cycloaddition product. While the small number of chemically inequivalent carbon sites eliminated low-symmetry syn/anti threads, the large number of magnetically inequivalent ones (i.e., distinct C-H orientations) in CODEX NMR was incompatible with the high-symmetry syn threads. Anti threads with two chemically and eight magnetically inequivalent sites provide the only consistent fit of the experimental data. These conclusions were convincingly corroborated by quantum-chemical simulations, which showed good agreement of isotropic chemical shifts only for the anti threads. This represents the first molecular-level identification of a specific type of nanothread. The typical length of the perfect, fully saturated thread segments was around 14 bonds and they accordingly constitute small clusters (according to 13C and 1H spin diffusion analyses) which likely reside within an overall hexagonal thread packing along with other, less-perfect or less-saturated brethren. The relatively slow T1C relaxation confirms the nanometer-scale length of the periodic perfect structure, indicates that the perfect threads are particularly rigid, and enables their selective observation in 13C NMR.

Version 2: textual edits were made. No new figures added. 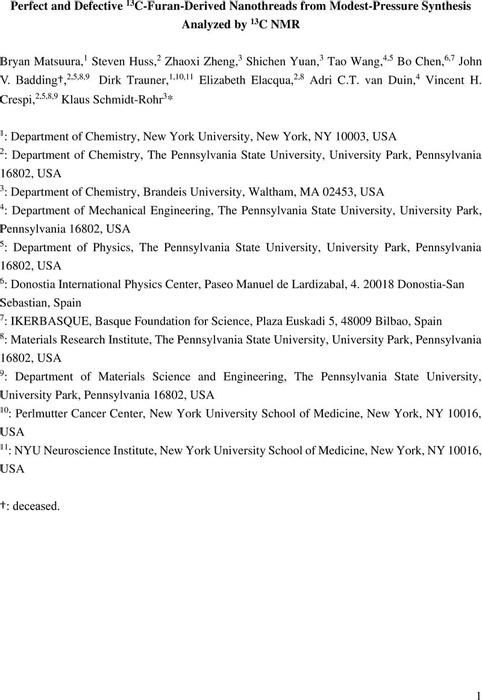 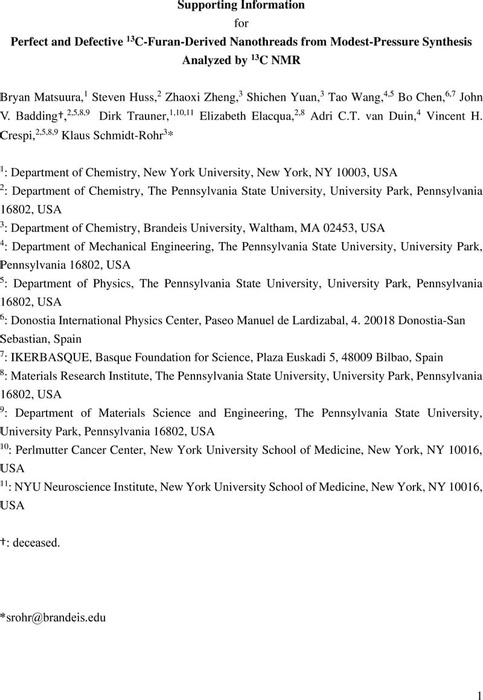 We are encoding your file so that it is compatible across browsers, depending on file size and type this may take some time.
SI FuranNanothreadsNMRpaper.0421subm v2

There are no conflicts of interest