Liquid-liquid phase separation (LLPS) of proteins and DNA has recently emerged as a possible mechanism underlying the dynamic organization of chromatin. We herein report the role of DNA quadruplex folding in liquid droplet formation via LLPS induced by interactions between DNA and linker histone H1 (H1), a key regulator of chromatin organization. Fluidity measurements inside the droplets, binding assays using G-quadruplex-selective probes, and structural analyses based on circular dichroism demonstrated that quadruplex DNA structures, such as the G-quadruplex and i-motif, promote droplet formation with H1 and decrease molecular motility within droplets. The dissolution of the droplets in the presence of additives and the LLPS of the DNA structural units indicated that in addition to electrostatic interactions between the DNA and the intrinsically disordered region of H1, π-π stacking between quadruplex DNAs could potentially drive droplet formation, unlike in the electrostatically driven LLPS of duplex DNA and H1. According to phase diagrams of anionic molecules with various conformations, the high LLPS ability associated with quadruplex folding arises from the formation of interfaces consisting of organized planes of guanine bases and the side surfaces with high charge density. Given that DNA quadruplex structures are well documented in heterochromatin regions, it is imperative to understand the role of DNA quadruplex folding in the context of intranuclear LLPS. 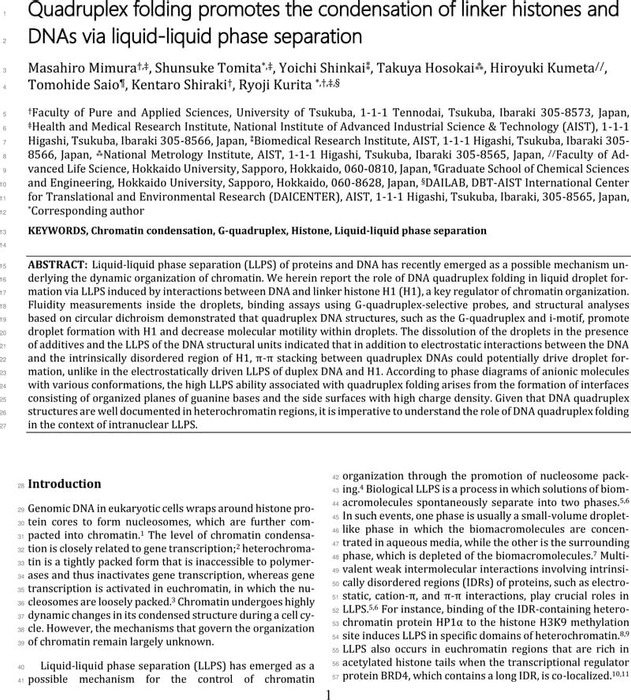 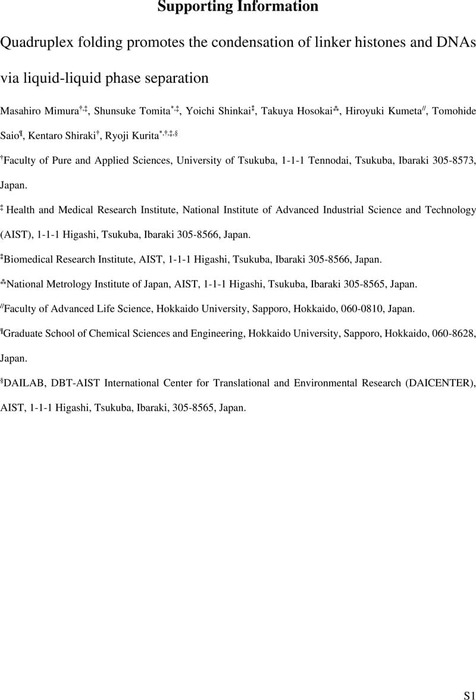 We are encoding your file so that it is compatible across browsers, depending on file size and type this may take some time.
SI v2