We use cookies to distinguish you from other users and to provide you with a better experience on our websites. Close this message to accept cookies or find out how to manage your cookie settings. Learn more about our Privacy Notice... [opens in a new tab]
Earth, Space, and Environmental Chemistry
search

This work describes the preparation of novel fluorescent bentonite clay (BP), modified with carbon quantum dots nanomaterials (CDs), and its usage as lead removal platform, the CDs was prepared using graphitic waste serving as carbon source material via hydrothermal method, and the as obtained CDs were found to be fluorescent, in spherical shape, positively charged and smaller than 5 nm. Encouraged by their structure and photoluminescence feature, they were used hereafter as intercalants or surface modifiers, in order to make fluorescent bentonite nanocomposites. Bentonite was used as negatively charged model of aluminosilicate and reacted with the positively charged CDs. Interestingly, CDs were found to intercalate bentonite as judged from XRD patterns, and TEM. Indeed, the basal distance of bentonite clay d(001) shifted from 1.2 nm to 2.9 nm, after bentonite modification using the prepared carbon dots; moreover the XRD pattern of BP-CDs recorded in the some regions show some additional diffraction peaks along with those for bentonite. The peaks centered at 2Ѳ =27 degree allocated to the facets of graphitic-like carbon, originated from the introduced carbon dots inside bentonite galleries. The prepared materials were characterized by XPS, FTIR and fluorescence analysis. The obtained results indicate that CDs were successfully intercalated inside bentonite matrix and found to be stable over time. The BP-CD nanocomposites were finally used as efficient hybrid platform for led removal with and extraction efficiently of 95% under light condition, room temperature under alkaline conditions and after only 10 min of reaction. 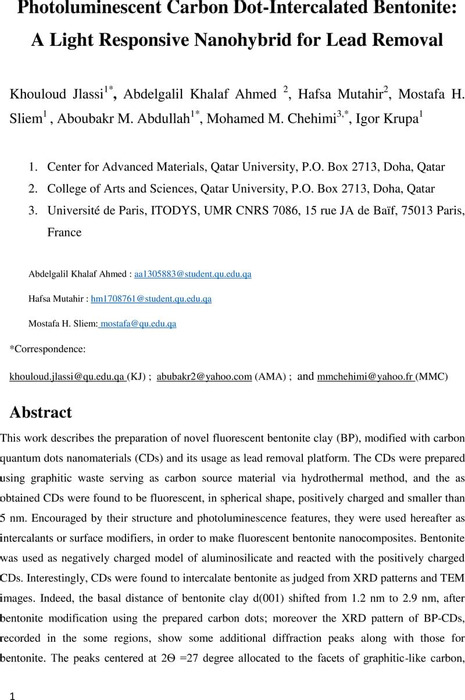