The synthesis of pharmaceutical relevant compounds keeps close ties with the development of metalbased catalysts, which remains a common goal in chemical research to solve challenges of application, such as the deactivation of catalyst caused by its tender structure or metal leaching. In this work, we reported a simple and manageable method for the preparation of heterogeneous catalyst with stable cobalt nanoparticles that encapsulated by the outer graphitic shell, whose catalytic activity and selectivity for the synthesis of primary amines via a wide range of aldehydes (more than 52 examples), ketones (more than 26 examples), and nitriles (more than 18 examples) were proved to be broadly effective (but not all of them are shown). And also, subsequent synthesis of N, N-dimethylamine compounds following a brand-new tandem pot process by the same Co-based catalyst were simultaneously explored. In most cases, the Co-based catalyst enables easy substitution of –NH2 moiety towards functionalized and structurally diverse molecules under very mild industrially viable and scalable conditions, providing cost-effective access to numerous amines and other precursors for more complex drug products. More surprisingly, the Co-based catalyst can also be easily recycled due to its intrinsic magnetism and still remains excellent catalytic activity and selectivity for the target products even after reusing up to twelve times. Results from analytic technologies, including but not limited to XRD, XPS, TEM/Mapping and in-suit FTIR, reveals that the structural features of catalyst are closely in relation to its catalytic mechanisms; in simple terms, the outer graphitic shell is activated by the electronic interactions between the inner metallic nanoparticles and the carbon layer as well as the induced charge redistribution. Except for the gram-scale batch test in laboratory, we have firstly evaluated the lifecycle of Co-based catalyst on an automatic hydrogenation reactor by employing continuous flows of reactant (5 ml/min, react within 1.6 min) under the similar conditions (90 °C, 3 MPa H2, 0.1 mol/L), whose results suggests the theoretically minimal lifecycle of Co-based catalyst can reach a continuous period of 72 h without any significant loss of catalytic efficiency. In conclusion, the advantages of this newly developed method involving operational simplicity, high stability, easily recyclable, cost-effective of the catalyst, and good functional group compatibility for the synthesis of functional amines, as well as the highly efficient and industrial applicable tandem synthesis process. 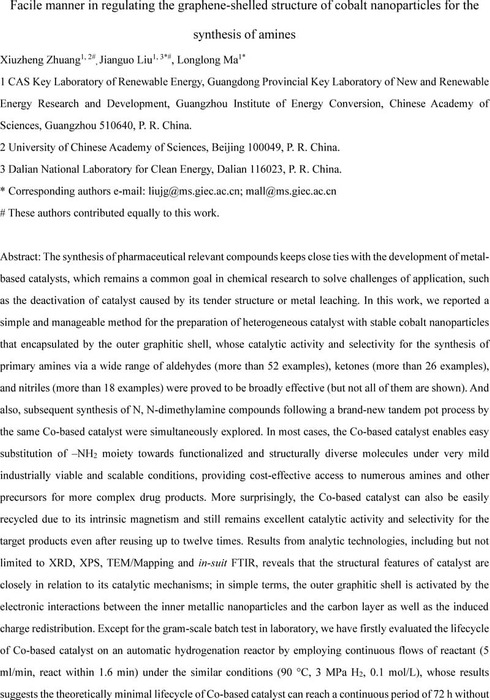 The authors declared that there is no conflict of interest.