Fluoride is a natural contaminant of water ⁠that endangers many people worldwide when present in concentrations higher than 2 ppm. Here, fluoride removal by four different nanostructured colloidal particles (SiO2@ZrO2nc, SiO2@ZrO2c, @ZrO2nc, and @ZrO2c) was measured in batch systems within a period of 24 h. Surprisingly, these materials removed fluoride from the water solutions and reached equilibrium in less than 10 minutes. The combination of high specific surface and fast fluoride removal placed these materials among the top materials currently known in fluoride removal. Also, the impact of element leaching was measured and quantified. The influence of time, pH, and fluoride concentration on leaching of Zr and Si was evaluated with a response surface methodology. Leaching of Zr and Si continued for several hours and depended on first-order, quadratic and cross-product coefficients. Previous studies of fluoride removal with zirconium oxide often assumed that a decrease in fluoride concentration in the solution indicated that fluoride was bound to the surface of the oxide. Zirconium oxide's solubility in water is low, but not zero. Hence, Zr might have formed soluble fluorocomplexes. This is the first report of fluoride removal with zirconium oxide that studied the leaching of the solid to exclude the formation of soluble fluorocomplexes. 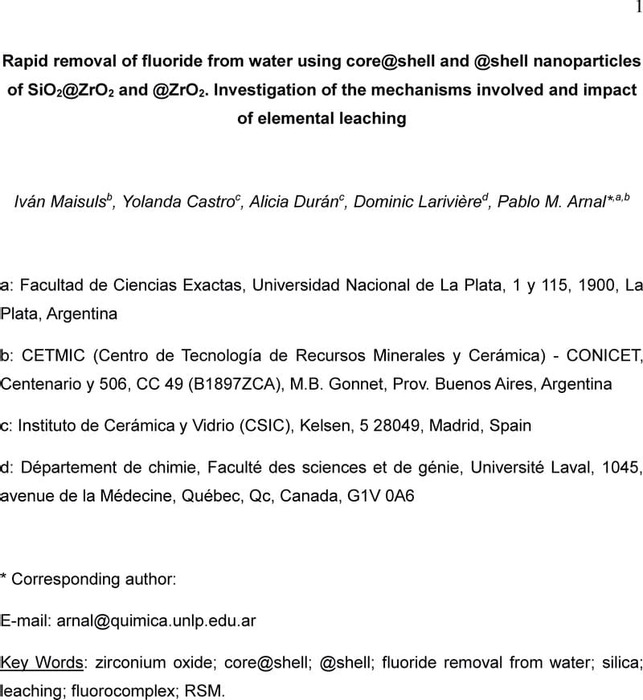 We are encoding your file so that it is compatible across browsers, depending on file size and type this may take some time.
2021-03-22PP

On behalf of all authors, the corresponding author states that there is no conflict of interest.