The self-assembly of single amino acids is very important topic of research since there are plethora of diseases like phenylketonuria, tyrosinemia, hypertryptophanemia, hyperglycinemia, cystinuria and maple syrup urine disease to name a few which are caused by the accumulation or excess of amino acids. These are in-born errors of metabolisms (IEM’s) which are caused due to the deficiency of enzymes involved in catabolic pathways of these enzymes. Hence, it is very pertinent to understand the fate of these excess amino acids in the body and their self-assembling behaviour at molecular level. From the previous literature reports it may be surmised that the single amino acids like Phenylalanine, Tyrosine, Tryptophan, Cysteine and Methionine assemble to amyloid like structures, and hence have important implications in the pathophysiology of IEM’s like phenylketonuria, tyrosinemia, hypertryptophanemia, cystinuria and hypermethioninemia respectively. In this manuscript we report the self-assembly of lysine hydrocholride to fiber like structures in deionized water. It could be observed that lysine assemble to globular structures in fresh condition and then gradually changes to fiber like morphologies by self-association over time after 24 hours. These fibers gradually change to tubular morphologies after 3 day followed by fractal irregular morphologies in 10 and 15 days respectively. Notably, lysine exists as positively charged amino acid at physiological pH and the amine groups in lysine remain protonated. Hence, the self-assembling properties of lysine hydrochloride in deionized water is also pertinent and give insights into the fate of this amino acid in body in case it remains unmetabolized. Further, MTT assays were done to analyse the toxicities of these aggregates and the assay suggest their cytotoxic nature on SHSY5Y neural cell lines. Hence, the aggregation of lysine may be attributed to the pathological symptoms caused in diseases like hyperlysinemia which is associated with the neurological problems like seizures and short-term memory as observed in case of amyloid diseases like Parkinson’s and Alzheimer’s to name a few.

This is the first preliminary version of this study 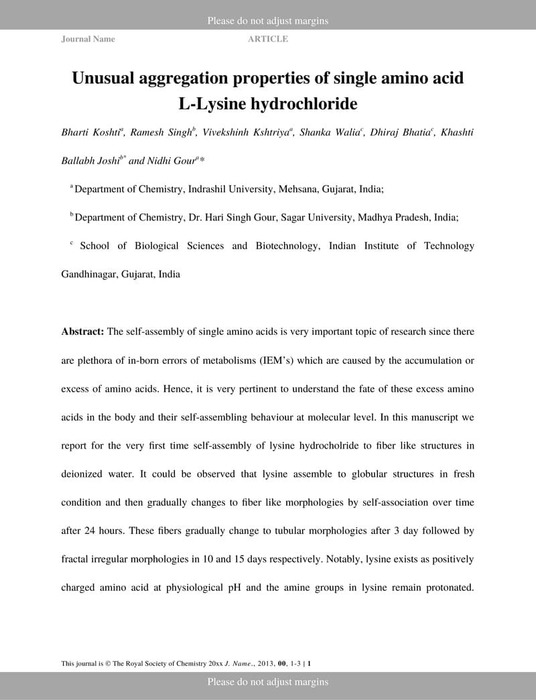 We are encoding your file so that it is compatible across browsers, depending on file size and type this may take some time.
ESI Lys 3.03 RV

No Conflict of Interest to declare.