The wide range of optical and magnetic properties of the lanthanide(III) ions is associated to their intricate electronic structures, which in contrast to lighter elements is characterized by strong relativistic effects and spin-orbit coupling. Nevertheless, computational methods are now capable of describing the ladder of electronic energy levels of the simpler trivalent lanthanide ions, as well as the lowest energy term of most of the series. The electronic energy levels result from electron configurations that are first split by spin-orbit coupling into groups of energy levels denoted by the corresponding Russel-Saunders terms. Each of these groups are then split by the ligand field into the actual electronic energy levels known as microstates or sometimes mJ levels. The ligand field splitting directly informs on coordination geometry, and is a valuable tool for determining structure and thus correlating the structure and properties of metal complexes in solution. The issue with lanthanide complexes is that the determination of complex structures from ligand field splitting remains a very challenging task. In this manuscript, the optical spectra – absorption, luminescence excitation and luminescence emission – of ytterbium(III) solvates were rec-orded in water, methanol, dimethyl sulfoxide and N,N-dimethylformamide. The electronic energy levels, that is the microstates, were resolved experimentally. Subsequently, density functional theory (DFT) calculations were used to model the structures of the solvates and ab initio relativistic complete active space self-consistent field (CASSCF) calculations were employed to obtain the microstates of the possible structures of each solvate. By comparing experimental and theoretical data, it was possible to determine both the coordination number and solution structure of each solvate. In water, methanol and N,N-dimethylformamide the solvates were found to be eight-coordinated and to have a square anti-prismatic coordination geometry. In DMSO the speciation was found to be more complicated. The robust methodology developed for comparing experimental spectra and computational results allows the solution structures of lanthanide complexes to be determined, paving the way for the design of complexes with predetermined properties. 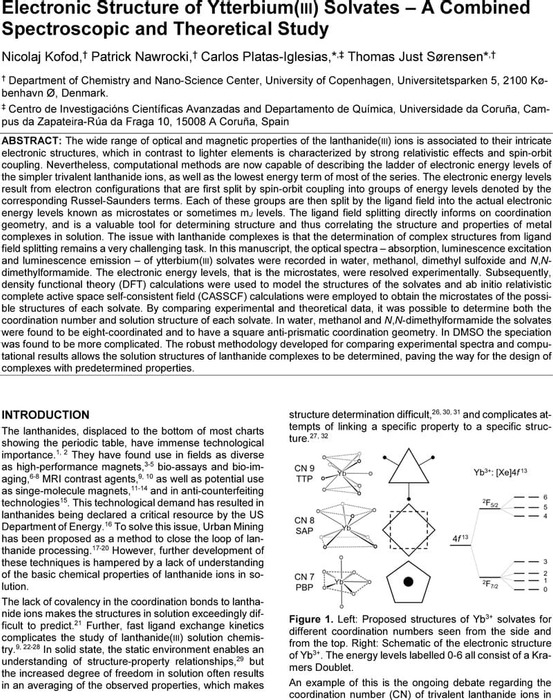 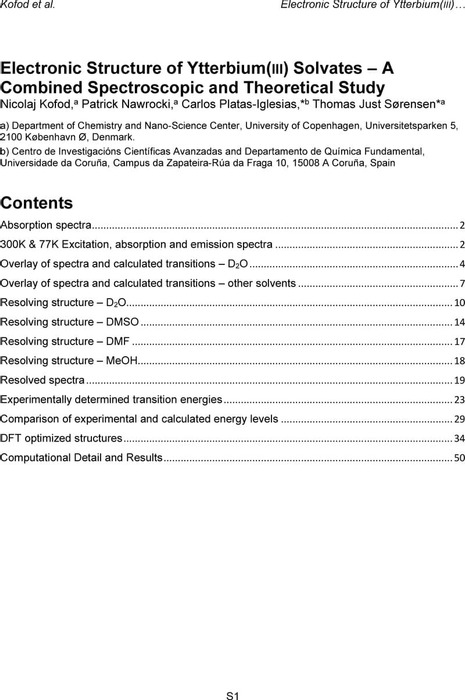 We are encoding your file so that it is compatible across browsers, depending on file size and type this may take some time.
Yb-solvates v1 SI