Heavy-atom-free sensitizers forming long-living triplet excited states via the spin-orbit charge transfer intersystem crossing (SOCT-ISC) process have recently attracted attention due to their potential to replace costly transition metal complexes in photonic applications. The efficiency of SOCT-ISC in BODIPY donor-acceptor dyads, so far the most thoroughly investigated class of such sensitizers, can be finely tuned by structural modification. However, predicting the triplet state yields and reactive oxygen species (ROS) generation quantum yields for such compounds in a particular solvent is still very challenging due to a lack of established quantitative structure-property relationship (QSPR) models. Herein, we analyzed the available data on singlet oxygen generation quantum yields (F?) for a dataset containing > 70 heavy-atom-free BODIPY in three different solvents (toluene, acetonitrile, and tetrahydrofuran). In order to build reliable QSPR model, we synthesized a series of new BODIPYs containing different electron donating aryl groups in the meso position, studied their optical and structural properties along with the solvent dependence of singlet oxygen generation, which confirmed the formation of triplet states via the SOCT-ISC mechanism. For the combined dataset of BODIPY structures, a total of more than 5000 quantum-chemical descriptors was calculated including quantum-chemical descriptors using Density Functional Theory (DFT), namely M06-2X functional. QSPR models predicting F? values were developed using multiple linear regression (MLR), which perform significantly better than other machine learning methods and show sufficient statistical parameters (R = 0.88 ? 0.91 and q2 = 0.62 ? 0.69) for all three solvents. A small root mean squared error of 8.2% was obtained for F? values predicted using MLR model in toluene. As a result, we proved that QSPR and machine learning techniques can be useful for predicting F? values in different media and virtual screening of new heavy-atom-free BODIPYs with improved photosensitizing ability. 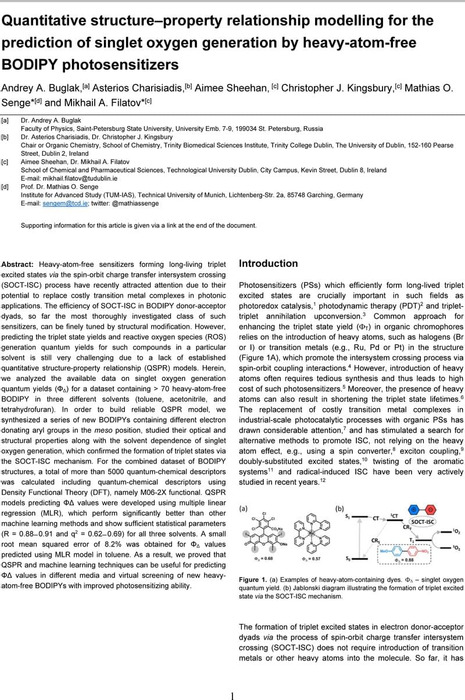